(23 Dec. 2018) — I pose this question to the governments of sovereign countries in Latin America and the Caribbean (LAC): Who’s afraid of Trump’s China Policy? The Trump Administration is determined, working overtly and behind the scenes, to blunt China’s economic and political expansionism in the hemisphere. Curbing China in all regions of the world is a policy of the Trump Administration which has support in the U.S. Congress. However, there is broad disagreement with Trump on how China’s expansionism should be curtailed. With the Democrats assuming control of the U.S. House of Representatives in January 2019, we can expect push back on Trump’s overall approach to geopolitical and national security issues, including his China policy.

There are many in the U.S. Congress who, while uncomfortable with China’s expansionism in the LAC region and elsewhere, have a different perspective on the use of U.S. power and influence. Democrats, in particular, would rather use intensely focused diplomatic initiatives matched by robust economic support to influence governments in the region.  Providing an alternative to China is on the minds of many legislators, but they will not support reckless action by the Trump administration in the LAC region. Be that as it may, there is no solace to be gained from this dynamic. Trump’s actions are unpredictable and damage may be done before any reasonable restraint can be applied.

No government in the LAC region should believe it is immune from policies of the Trump administration, as long as Trump remains in office. It is precisely because of the chaos and incoherence in Trump’s geopolitical policies why they should be concerned. And, that is precisely the reason why Trump’s anti-China policies and his administration’s unrelenting pressure on Venezuela and Nicaragua cannot be ignored. With the Trump Administration on a losing path it looks for easy targets – countries most dependent on the United States and the most vulnerable economies. Trump is looking for victories anywhere he can find them, and will take advantage of weak, submissive leaders in the LAC region who are scared or unwilling to push back on U.S. policies.

Trump’s shambolic and chaotic policy-making became significantly worse with the sudden resignation of Defense Secretary James Mattis. Gen. Mattis’ absence from the Trump administration makes even more unpredictable and threatening future Trump responses to Venezuela and Nicaragua.  The possibility of military action against Venezuela or covert support for a military coup against the Nicolas Maduro regime is now a strong possibility. Whatever constraints Mattis was able to effect on possible reckless or wanton use of force by Trump against Venezuela, or elsewhere in the hemisphere, has now been removed. The situation in Venezuela could become more volatile and engulf the LAC region in a crisis.

In the meantime, governments in the LAC region are being put under constant pressure by the Trump administration to reject what Pompeo and his predecessor have both described as China’s predatory economic engagement in the region. (The Ward Post) Whether LAC governments are bold enough to admit it, they are without any alternative to China and the U.S. is not offering them any. At the same time, most seem to cower under U.S. pressure and are unwilling to push back on the Trump administration. Yet, it is pressure they cannot ignore. The question is how they balance their countries’ interests against Trump’s ‘America first’ and ‘America only’ coercive geopolitical agenda. 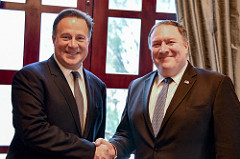 The government of Panama’s in-your-face engagement with China sends a strong message to Washington that not all countries in the region fear retribution from the Trump Administration. With the government of Panama poised to sign a number of agreements with the government of China the Trump Administration sought to blunt China’s hemispheric engagement by Secretary of State Mike Pompeo’s sudden visit to Panama. Secretary Pompeo, on October 18, 2018, made what was described as a surprise trip to Panama to hold discussions with Panama President Juan Carlos Varela. However, if Pompeo’s intent, as subsequently revealed, was to preempt China, he failed. 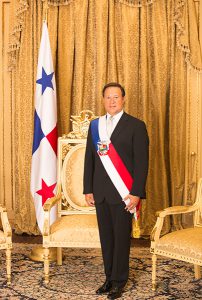 Perhaps expecting failure, the State Department appeared reluctant to reveal the true intent of Pompeo’s visit to Panama. In a pre-trip briefing to the Press corps at the U.S. State Department on October 17, 2018, a Senior State Department Official was coy about what would be discussed between Pompeo and Valera. There was no mention of China being on the agenda for discussions or that the imminent China-Panama agreements were the main focus for the sudden visit. According to the DoS Official, the discussions would be on bilateral issues and regional issues including counter-narcotics, counterterrorism, and illegal immigration, as well as to thank the government of Panama for its “leadership and vocal defense of democracy in both Nicaragua and Venezuela.”

When asked specifically about whether China’s huge investments in Panama and the region would be discussed, and whether there will be “a push back” to China’s investments the DoS Official vaguely noted that the Trump administration’s policy “has been very clear.” The DoS Official also stated that it was up to the government and people of Panama to determine their relations with China; and “that Chinese practices are not always beneficial to governments in the region.”

In an interview with a local television in Panama City, Pompeo was asked the purpose of his “sudden visit to Panama.” Perhaps to avoid any suggestion of failure in persuading Panama to pause in its relationship with China, Pompeo failed at first to mention China, and only did so when pressed further. His response was that the principal purpose of his visit was, “America wants good things for the people of Panama and for the region.” Further, that when China invests in the region they must do so consistent “with international law;” and there are “times where China has not behaved that way.” He said the U.S. wanted to make sure “that everybody has eyes wide open when it comes to China’s investments in their country and in this region.”

Considering the Trump administration‘s disregard for, and numerous violations of international law in actions taken during the first two years his presidency, suggesting that China must adhere to international norms ascribes a different standard for China vies-a-vies the United States. It smacks of hypocrisy! 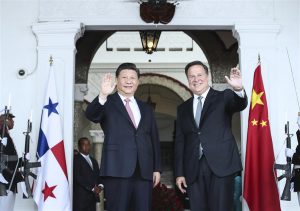 The real reason for Pompeo’s visit to Panama came as no surprise.  His futile attempt failed to derail the visit of China’s President Xi Jinping to Panama, which was set for December 3-4, 2018. Both countries signed nineteen agreements, on December 3, 2018, cementing and deepening their relationship across a broad spectrum of economic matters.  According to Panama’s President, Panama could become China’s gateway to the Americas. Panama established diplomatic relations with China after breaking ties to Taiwan in June 2017, and  China and Panama are currently negotiating a Free Trade Agreement.

There is little doubt U.S. government (USG) officials use every opportunity when in dialogue with government leaders of the LAC region to express objection to, and push back on China’s engagement in the region. It is not unexpected that LAC government leaders who visit Washington and hold meetings with USG officials would be subjected to this pressure. The question is how many have stood up, or willing to stand up to the United States as Panama has.

Tillerson’s visit to the region in February 2018, including to Jamaica, focused on China’s “predatory economic engagements” in the region, as well as on Venezuela, and both issues were at the top of the agenda for discussion with each head of government.  Secretary Pompeo and Senior DoS Officials have kept up the pressure on governments and their diplomatic representatives in Washington. Yet governments seem reluctant to push back on the Trump administration. Instead they seem to cower in silence. They find their relationships with China a controversial subject which they are fearful of discussing publicly. Panama’s President stands out as an exception, setting a principled example for others to follow.

The questions set out in my recent article on The Ward Post, which I had hoped to ask Jamaica’s Prime Minister Andrew Holness during his visit to Washington in November 2018, sought answers from Holness on China’s investments in, and relationship with Jamaica, among other things. Far from being controversial, the questions merely sought to elicit answers from the Prime Minister that would have afforded him an opportunity for a wholesome defense of his government’s China policy which were Jamaica’s sovereign prerogative and national interests to pursue. The Prime Minister passed on an opportunity to speak directly to policymakers in the U.S. capital, and to assure the Jamaican Diaspora community that his government was pursuing a policy in which he was confident was in Jamaica’s best interests. Jamaicans at home would also have benefitted significantly from the answers.

Also, as Chairman of CARICOM at the time of his visit to Washington, it would have been instructive had the Prime Minister chosen to explain China’s engagement in the Caribbean region in the context of the region’s economic and geopolitical interests.

However, silence on China’s engagement will not cause the issue to disappear. Ignoring it does not signal strength or independence. Quite the contrary!

In so far as current and future China engagement in the hemisphere deeply concerns the Trump Administration, the need for a responsible China engagement equally concerns the Jamaican and Caribbean Diasporas, as well as the people of the region. It is imperative for each country to be clear on where it stands. Of equal importance is for each country to see in Panama’s example a country exercising its sovereign right to make its own decisions in the interests of its people.