US weaves economic web to effect regime change in Cuba, Iran, and Venezuela

(19 October 2019) — Cuba, Venezuela, and Iran share a common space in president Donald Trump’s geopolitical hypothesis. The Trump administration operates on the premise that robust sanctions regimes which isolate the three countries from the international financial system, in particular by denying them access to US banking facilities, by restricting their access to international commerce, the governments in Havana, Tehran, and Caracas would capitulate and bow to Trump’s will. While this is an unlikely outcome, it does not represent president Trump’s true objective.

Experienced US State Department diplomats were marginalised, and diplomacy was abandoned for coercion and belligerent rhetoric and military threats, particularly against Iran and Venezuela. The statements and actions of the Trump administration made it impossible for these governments to seek accommodation with the Trump administration. From the very outset, the absence of US diplomatic initiatives and the unwillingness to negotiate with the targeted governments provided clear evidence that changed behaviour in Havana, Tehran, and Caracas was not the true objective. President Trump, upon taking office in January 2017, targeted the governments of Cuba, Iran, and Venezuela for regime change. Uncertainty lies in the means to achieve that end, there are no subtleties in Trump administration’s policies.

The US president and his senior foreign policy advisers have made it clear these governments are to be replaced by new leadership which, among other things, would fall within Washington’s sphere of influence. The Trump administration utilized trade, and economic and security assistance relationships to co-opt other governments that were dependent on the US. Generally, governments were warned of consequences should they choose not to support the US president’s policies. Cowering leaders fell in line. However, contrary to Trump administration expectations, most European governments resisted the pressure from Washington. Few in the Western Hemisphere resisted.

Driven in part by his disdain for president Barack Obama, and in pursuit of his objectives, president Trump steadfastly pursued policies to dismantle the diplomatic successes of, and the relationships established by president Obama. The economic and political linkages between the three countries provided the opportunity. The Trump administration believed they could be dealt with as a group and were mistakenly thought to be easy targets.

The situation differs significantly for each country, and must be seen from different historical and geopolitical perspectives and current global contexts. While there were similarities in their early relationships with the United States, they were not for the same purpose, and did not arrive at their current relationships with the US the same way. At some point in their histories, they were countries whose resources were being exploited by America’s business and commercial elites. Iran and Venezuela oil supplied America’s insatiable energy consumption, and Cuba provided a playground for America’s rich, famous, and infamous. 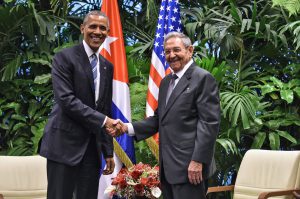 Under the leadership of Fidel and Raul Castro, Cuba demonstrated over the course of more than 60 years its resilience and did not bow to the U.S. economic embargo. President Obama, recognising the folly and failure of US decades old policy towards Cuba, made significant progress to reverse them. Rapprochement in US-Cuba relations made steady progress after president Obama took the first steps in 2009 to ease travel between the two countries.  Subsequent actions expanding economic relations, travel, and financial transactions with Cuba brought the countries to establishment of diplomatic relations before the end of president Obama’ second term. Cuba’s diplomatic isolation by the US had ended.

President Trump took a wrecking ball to the diplomatic and economic relationships established by president Obama between the US and Cuba. As promised to his Cuban-American supporters in Miami to reverse Obama’s Cuba policy, president Trump abandoned US-Cuba rapprochement.

Imposing new economic sanctions to restrict Cuba’s economic relations with Venezuela, in particular depriving Cuba of Venezuela oil supplies; restricting U.S. citizens’ business and leisure travel to the island; restricting financial transactions and transfer of funds to Cuba; as well as subjecting foreign investors in Cuba to lawsuits in U.S. courts to recover assets expropriated by the Cuban government after the revolution, will, over the medium- to long-term, destabilize the Cuban economy. Foreign investors will be cautious in their approach to new business dealings with Cuba. Cuban entrepreneurs and small businesses that were seeing expansion and benefit from president Obama’s policy will be severely impacted.

President Trump’s re-imposed restrictive travel, financial, and commercial measures on Cuba is reminiscent of the Cold War era. Cuba’s economy is feeling the effects, and the Cuban people are suffering from the re-imposed sanctions. The Cuban leadership knows how to resist and will do so with the expectation that when Trump leaves office a Democratic president in the White House will put rapprochement back on track.

Trump administration’s most recent sanctions against Cuba were artfully tied to Cuba’s economic relationship to Venezuela and the objective of removing Nicolás Maduro from office. These new sanctions will not persuade Cuba either way. The Cuban leadership knows that Trump’s policies against Cuba will not be reversed even should the Cuban government sever its ties to Maduro’s regime. Thus, Trump administration’s actions merely harden Cuba’s resistance.

Grouping all three countries together the Trump administration ignores the roots of their historical relationships. They share a similar historical perspective as victims of U.S. hegemony and economic exploitation. Out of necessity, as well as their ideological underpinnings and experiences, their affiliations and interrelationships grew deeper. They view current Trump administration’s actions against them as consistent with historical targeting of their countries to prevent them from exercising their sovereign prerogative to choose and pursue their own ideological paths and geopolitical relationships. They are accustomed to Washington attempting to dictate how they should conduct their internal and external affairs. The heavy hand of Washington has been applied in different ways and to varying degrees. The results vary from country to country. For each, the need to survive made them more resilient.

Trump’s pullback from war with Iran and rumblings of possible diplomatic initiatives by the US president cannot be seen as any significant change in Trump’s regime change policy. Cuba will not yield and neither will Iran. But, Iran is a far more complex set of issues which include other players in the Middle East and Europe and will require much more expansive analysis. That’s for a different article.

Meanwhile, there  is no imminent end in sight for the Maduro regime in Venezuela, considered the most vulnerable among the three countries. Yet, with the obvious chaotic nature of Trump administration foreign policy, and despite the recent firing, or resignation of Trump’s hawkish national security adviser, the U.S. seems to be drifting closer to a military confrontation with Venezuela. Invoking the Rio Treaty at the OAS falsely gives the Trump administration a multilateral cover. But, anti-Maduro leaders in the region took a step closer to giving the imprimatur for military intervention. The military approach suffered a major setback with a fractured Venezuela opposition. Seasoned Venezuelan opposition leaders, not taking orders from Washington, will pursue negotiations with Maduro. There are lots of uncertainties for the future outcome.

Trump squeezing Cuba to pressure Venezuela could backfire on the US