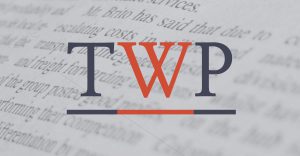 (26 May 2019) — By increasing its military presence in the Middle East the United States represents a tempting target for terrorists constantly looking for opportunities to attack American citizens and assets around the world. The terrorists’ dream is to do harm to U.S. citizens and especially to U.S. military personnel and assets. Terrorist groups are particularly adverse to deployment of U.S. military personnel and assets in the Middle East. This is not opinion. It is grounded in historical precedents of the numerous attacks and attempted attacks against U.S. military and civilian targets in the region. Thus, it is hard not to believe certain members of the Trump Administration are deliberately ignoring the increased possibility of a terrorist attack against the U.S. military as a result of the recent deployment, and not knowing which group or groups would be the most likely perpetrator should such an attack occurs.

Suggesting that a terrorist attack against the U.S. military would be the act of a terrorist group controlled by Tehran are patently false and appears to be a preemptive effort to deliberately deceive the American public and build support for future military action against Iran. Terrorist groups based primarily in Lebanon and Gaza, in particular Hizbollah and HAMAS, with cells scattered throughout the Middle East, arguably are supported and controlled by Iran. They would be blamed by the Trump Administration for any attack on U.S. military assets and Iran would be accused of directing the attack. A skeptical international community versed in the activities of known terrorist groups would not be persuaded by the Trump Administration.

If indeed Iran exercises control over Hizbollah and HAMAS, these two terrorist organizations would be the least likely to attack U.S. military assets knowing that such reckless action would trigger a devastating war for Iran. That either of these terrorist groups would want a war between the U.S. and Iran which they know would cripple Iran belies reality in the region. Decision makers and pundits in Washington are ignoring two of the most deadly terrorist groups in the region, al-Qaida and ISIS, which are not controlled by or aligned with Iran. Al-Qaida and ISIS and their affiliates have fought on opposing sides of conflicts involving Iran. This has been the case in Iraq and Syria.

Also, the origins of al-Qaida and ISIS are rooted in Sunni religious doctrine which is diametrically opposed to Iran which is a Shia state. America is a common enemy but the rationale for their causes differ significantly. 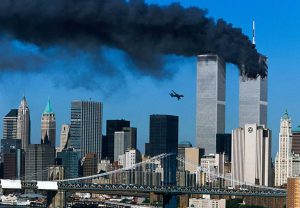 Al-Qaida and its affiliates have a long history of attacking, or attempting to attack, numerous U.S. targets all over the world, particularly in the Middle East and Asia. When al-Qaida sprung up in the 1990s the terrorist group’s major focus was to expel American military forces from occupation of Muslim lands. Al-Qaida, in particular targeted U.S. military personnel and assets based in Saudi Arabia. However, al-Qaida did not restrict itself to military targets and its most egregious attack was on American civilian targets on September 11, 2001 (9/11). The degrading of al-Qaida during Presidents George W. Bush’s and Barack Obama’s administrations has not persuaded al-Qaida to abandon its original objectives. Thus, al-Qaida continued to pursue its core objectives following the death of its leader Osama bin Laden by a military operation on May 2, 2011 ordered by President Obama.

Similarly, ISIS leaders have not changed their focus of targeting the United States following collapse of the caliphate dream. Both al-Qaida and ISIS have adopted different tactics to do harm to Americans. Their objectives have not changed. 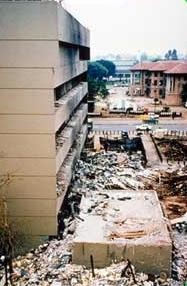 Al-Qaida has been particularly quite astute at expanding its presence in conflict situations and in failing states. They have done this in Afghanistan, Yemen, Iraq, and Syria, as well as in Africa and Asia, with considerable success. They have succeeded in doing great damage to the U.S. by killing many U.S. citizens and destroying significant U.S. assets in Saudi Arabia, Afghanistan, Yemen, and Iraq. This list does not include the egregious attacks on U.S. civilian targets, such as on the U.S. Homeland on 9/11, and on the U.S. embassies in Nairobi, Kenya and Dar-es-Salaam, Tanzania. The attacks on the U.S. embassies in Nairobi and Dar-es-Salaam on August 7, 1998 killed some 224 people, including 12 Americans, and injured many thousands more.

Al-Qaida’s military targets included attacks on U.S. military personnel at the Khobar Towers in Saudi Arabia on June 25, 1996 killing 19 U.S. Airmen and more than 350 injured. According to Osama bin Laden at the time, the stated purpose was to drive “the American infidel” from Arab lands. Al-Qaida affiliate al-Qaida in the Arabian Peninsula (AQAB) attacked the USS Cole, a U.S. warship, in Aden Harbor, Yemen, on 12 October 2000 killing 17 sailors and injuring 39. Al-Qaida also targets vulnerable hotels frequented by U.S. military service members in the Middle East and elsewhere. The lessons of the USS Cole should serve as a warning to the Trump Administration of the dangers to its military deployment in the Persian Gulf. 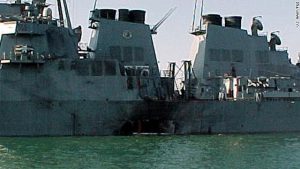 The Islamic State in Iraq and Syria (ISIS aka Da’esh,   ISIL and IS) is not controlled by Iran. ISIS fought against the Iranian military in Iraq and Syria. Iran-controlled forces supported Syrian leader Bashir al Assad while ISIS fought and captured large swathes of Syrian territory to establish its caliphate. ISIS and al-Qaida though not allies against the U.S. have a shared objective of attacking American citizens and assets wherever they may be found. No one should doubt or discount the possibility that ISIS finds the increased U.S. military presence in the Middle East, even outside of the direct conflict zones of Iraq and Syria, as tempting targets. ISIS possible actions, like any action from al-Qaida, against the U.S. military in the region cannot be ascribed to Iran unless there is verifiable untainted intelligence that such attacks were manipulated from Tehran or directed from Iran’s territory. No one should trust the words of the Bush Administration neo-con hold over hawks now serving in the Trump Administration.

There is justifiably reasons to doubt whether the American people and the international community will be told the truth of the source of any terrorist attack against U.S. military personnel deployed in the Persian Gulf and elsewhere in the region. With the drums of war beating in Washington, and the threats and warnings of annihilation against Iran by members of the Trump Administration, in particular by national security adviser John Bolton and Secretary of State Mike Pompeo, any terrorist attack against the U.S. in the region are likely to be construed and sold to the American people as an attack directed and controlled by the Iran Revolutionary Guard Corps – Qods Force (IRGC). This would totally ignore what could arguably be a more plausible source of the terrorist attack against the U.S. military in the Persian Gulf or elsewhere in the Middle East. By blaming Iran, the war hawks would seek to trigger a war with Iran. This scenario would be completely ignoring that a war between the United States and Iran would more serve the interests of the terrorist groups al-Qaida and ISIS and not Hizbollah and HAMAS in this context.

Terrorists and terrorist groups are opportunistic. They take advantage of conflict situations or near conflict situations to further their nefarious objectives. Both al-Qaida and ISIS have instructed their sympathizers, which includes individuals acting on their own to kill U.S. citizens and attack U.S. targets wherever they exist and wherever opportunities for such attacks are present. The increased presence of U.S. military service members and assets in the Middle East provide such opportunity.

We are left to ponder whether the Trump Administration will blame non-Iran affiliated terrorist groups such as al-Qaida and ISIS if the U.S. intelligence community (US IC) have evidence of their involvement, or will blame be levelled against Iran’s IRGC as pretext to attack and in the words of war hawks in Washington, ‘obliterate’ Iran. If such a terrorist attack takes place, speculation is rife, that the war hawks would prevail and give the Trump Administration the pretext for an attack on Iran. The U.S. State Department in a departure from prior practice for the first time designated a foreign government entity a Foreign Terrorist Organization (FTO) by naming the IRGC an FTO on April 15, 2019. 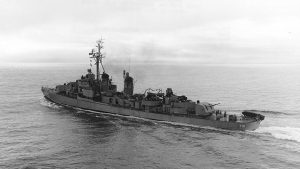 The fact that President Donald Trump has stated that he does not want to go to war with Iran is no solace, and those of us who have an appreciation for history consider the fact that America has gone to war under false pretenses in the past. The American people and the U.S. Congress have been deceived in the past. Two examples which stand out are the alleged Gulf of Tonkin attack on the USS Maddox a U.S. destroyer presumably in international waters on August 2, 1964 which provided President Lyndon Johnson with Congressional support through the Tonkin Gulf Resolution to launch a military response which became the Vietnam War. More than 58,220 American military personnel were killed in the Vietnam War. Another 304,000 were injured, with over 75,000 severely disabled.

More recently in March 2003 the invasion of Iraq received Congressional and public support on the false premise that Saddam Hussien possessed weapons of mass destruction (WMDs) which threatened the U.S. and its allies. As a keen observer of the work of the Hans Blix led United Nations inspections in Iraq, I was convinced there were no WMDs in Iraq. President George W. Bush used manipulated and deceptive intelligence to justify the invasion of Iraq and to gain support from the U.S. Congress and the American public.

I sat in the gallery of the UN Security Council (UNSC) chamber and listened attentively to Secretary of State Colin Powell spelling out the U.S. case for invasion of Iraq. With CIA Director George Tenet sitting directly behind him, Secretary Powell made a strong case. However, the evidence he provided were false and we knew it. I remarked at the time to one of my colleagues on the UNSC Counter-Terrorism Committee (CTC) that Secretary Powell was brilliant in his presentation but that the case he presented was not supported by the facts. We also knew that given more time the UN inspectors would have proven the U.S. wrong.

Secretary Powell’s presentation to the UNSC was broadcast live on U.S. television stations. Most Americans believed Secretary Powell and the neo-con war hawks in Washington. Most members of the UNSC were not convinced and they refused to grant the U.S. the imprimatur it sought to invade Iraq. Failure to obtain UNSC approval for the invasion of Iraq made the U.S. invasion an illegal act of war.

Will history now repeat itself and will the fierce advocacy of war with Iran prevail in the Trump Administration as they did in the Bush Administration for the invasion of Iraq?