(25 Sept. 2017) — If only U.S. President Donald Trump and North Korean President Kim Jong-un could contain their bellicose rhetoric and name calling, the world might remain safe.  But, chances are, name calling will morph into dangerous actions on either or both sides. In my view, in the same way old time schoolyard bullying generally ends in fisticuffs, Trump’s tweets and Kim’s tats could lead to military conflict, worse yet nuclear war. Should sound minds and level heads eventually prevail and diplomacy is given a chance, the world could be spared conflagration and untold misery.

In the meantime, Trump calling Kim a “madman” and “Rocket man”, and Kim calling Trump a “dotard” a reference to someone whose mind is impaired by age, or someone in second childhood – a state of senility, may soon cross a line of no return. My Mom used to refer to a weak-minded person as “Doty” and a weak mind can be led in many directions at the same time.  During childhood we were told often, “Sticks and bones may break your bones, but words can never hurt you.” What was meant as admonition to refrain from violent response to verbal provocation was often proved wrong in schoolyard quarrels, as hurtful words often turned to dares and backing down signaled cowardice. We drew red lines on certain attacking words and the bully and bullied generally end up in fisticuffs and sometimes schoolyard brawls ensued. It never mattered who won, as defending one’s honor and proving not to be a coward despite the odds outweighed the outcome. 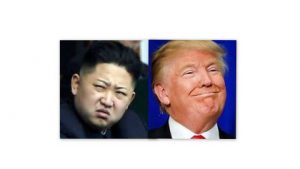 For leaders on the global stage, words matter! I wish references to Trump’s schoolyard antics and Kim’s petulance were merely just aberrations from normative behavior expected of responsible leaders. On the contrary, these are leaders of two countries with the power to do considerable harm to millions of innocent people.  These are two leaders who seem to be inching ever closer to military conflict by blabbering insults at each other; taking with them down this path other countries in the region and the entire global community.  Their words forecast unimaginable suffering to millions of people. In this case, while it matters who wins in the end, in a war between the United States and North Korea, we all lose.  There will be no winners.  We are transcending dangerous times when it is difficult to distinguish between schoolyard bullies and leaders who revel in careless utterances.

In this bellicose environment, we ask, is there a chance for diplomacy? I believe there still is. The recent multilateral sanctions imposed by the UN Security Council now backed by new U.S.-imposed unilateral sanctions, if given time could weaken the North Korean economy significantly. The objective of sanctions is to change the behavior of the party or parties acting contrary to international norms and can be achieved if sanctions are effectively implemented and enforced. Sanctions are important tools in coercing the sanctioned party and supporters to accept negotiation to achieve a desired outcome without resort to military confrontation. Between words (diplomacy) and war (military action) are sanctions. However, for sanctions to have the desired effect, broad cooperation is required, and the window of opportunity for peaceful resolution closes further, each time Trump and Kim open their mouths.

It is broadly anticipated that the potential for diplomatic resolution of North Korea’s nuclear proliferation depends on effective multilateral sanctions with broad international support. This includes enforcement by countries with the greatest nexus and closest economic relationships with the sanctioned target. In North Korea’s case, China’s role in implementing and enforcing sanctions is paramount.  President Trump, rather than constantly attempting to erase the successes of his predecessor, should take some lessons from the effective enforcement of UN and U.S. sanctions against Iran by the Obama Administration.  The economic impact of those sanctions on Iran forced the Iranian government to negotiate and agree to the Joint Comprehensive Plan of Action (JCPOA) which effectively put a stop to Iran’s development of its nuclear technology except for peaceful purposes.  Lessons learnt in all negotiations: there must be something on the table for both sides for the process to have integrity.

The recent additions to the UN Security Council sanctions now make it far more difficult for North Korea to sustain, over the long term, its disdain for the will of the international community. Should these sanctions be implemented effectively, with much depending on China, Kim Jong-un will soon realize that his options are limited and are closing fast.

Should anyone, President Trump included, believe sanctions don’t work, just review the history of the methodical imposition and effective implementation and enforcement of targeted financial and other sanctions by the Obama Administration against Iran, and against foreign banks enabling Iran to evade these sanctions. Again, we find Trump’s inflammatory rhetoric and threats against Iran could effectively destroy the JCPOA. It also makes it more difficult for North Korea or any other country to believe in the integrity of negotiating any agreement with the United States.

China has made it clear that a collapsed North Korean government is not in Beijing’s interest.  The humanitarian disaster would be overwhelming and the vulnerability of China’s border would be exposed. Flow of hundreds of thousands of North Korean refugees into China would not serve the interests of China or the Asian region.  Destabilizing the region would destabilize the global community.

While humanitarian disasters, such as hurricanes and earthquakes, quite rightly are of great concerns and deserve our immediate attention, we cannot afford to ignore or be distracted from the most dangerous exchange of insults between Donald Trump and Kim Jong-un.  The global community cannot afford to leave it up to tweets for tats by so-called dotards and rocket men. Who will be smart enough to end this rhetorical exchange?