(21 Nov. 2016) — The uncertainty of what a Donald Trump presidency is likely to mean in all areas of foreign policy – economic, political, security, etc., fueled by lack of specifics during the campaign or since the election makes it extremely difficult to do otherwise than to speculate.  Hence, my hesitation to opine on the future policies of POTUS Trump (president of the United States Trump) is driven by lack of coherence on foreign policy issues emanating from the Trump primary and presidential campaigns.  I followed closely both campaigns, a self-infliction of emotional distress on those who do not ascribe to Trump’s theories of the world.

I choose to refer to candidate Trump’s campaign rhetoric as statements rather than policies; and I choose to withhold my opinion as to Trump’s policies until I see a process in place where these theories will be implemented, or hopefully discarded.

However, having said that, my reaction to Mr. Trump’s statements so far is that should these statements become actionable policies then the international community, the Caribbean included, is in for a chaotic world in which international norms and traditional relationships will become meaningless. For now, it is my hope that these campaign statements will not become policies.  Perhaps I am hoping for too much (I am optimistic by nature), but what I have seen so far in terms of appointment of close advisers and potential candidates for cabinet positions, including for Attorney General of the United States, make me cringe with fear for the future; and that includes the future of U.S.–Caribbean relations. I am actually rooting for Mitt Romney to be Secretary of State in the Trump administration.

In light of the uncertainties, instead of trying to predict future U.S.–Caribbean relations under a Trump administration, I will confine my discussion at this time to elements of President Barack Obama’s administration’s relationship and programs with the Caribbean, some if not all of which might be in jeopardy. Some of these programs preceded the Obama administration but have been given broader interpretation and meaning under President Obama.  We have an obligation to try and protect these programs. 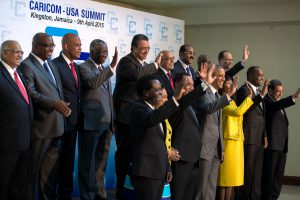 President Barack Obama joins the 14 leaders and Secretary General from the Caribbean Community (CARICOM) for a group photo at the University of the West Indies. (Official White House Photo by Pete Souza)

What we can surmise so far is that Mr. Trump espouses protectionism in trade relationships; aggressive and militaristic foreign policy based on U.S. military and economic power (Making America Great Again); disdain for human rights and other international norms, including by employing torture and enhanced interrogation techniques; religious and ethnic based bigotry, such as the proposed ban or restriction on Muslims; a decidedly anti-immigrant posture; denial of climate change and global warming; and a promotion of fossil fuels instead of alternative energy sources.

At this point we really don’t know how a Trump administration will view the Caribbean region in a global or regional context; and certainly not sure what will be exacted of Caribbean countries in their bilateral relations with the U.S.  Will he exact strict adherence to US policies in regional and international fora from the region for US continued partnership arrangements?  That’s the implication of some of his campaign statements.  What happens if, or when POTUS Trump carries out his threat to reverse President Obama’s Cuba policy initiatives?  Will he expect Caribbean countries to tag along with him?  He seems bent on enforcing, “If you are not with me, you are against me!”

Already the terms of U.S.–Caribbean partnerships (CARICOM and bilateral) are generally dictated from Washington with a bit of wiggle room extended to governments in the region. We should expect the wiggle room to be narrowed significantly.

Under CBI and related laws, each individual country is designated by the administration for participation in these programs and could see its designation terminated under a protectionist Trump administration. Withdrawal of designation could be triggered by a determination that a country has violated, for example, U.S. patents. This would include any country exercising a right granted under a World Trade Organization ruling, such as has been suggested in Antigua’s case.  I leave the details of these and other trade issues for discussion at a future date.

As to future security cooperation, I believe the level of cooperation on the partnerships established under the CBSI will be downgraded significantly.  Should any element of the regional and bilateral security programs remain, a Trump administration will expect each Caribbean country to contribute more and the U.S will contribute less.  In the past, I have advocated for expansion, and increased U.S. funding of CBSI programs; and that the U.S. government should put more resources in training and equipping each country’s law enforcement and security forces. Since 2010, when the CBSI was introduced by President Obama as a joint regional security program, the U.S. has put $437 million in the program which includes CARICOM member states, except Haiti and Suriname, and includes the Dominican Republic. That level of funding has not been enough to satisfy the security demands of the entire region. 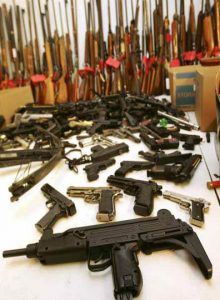 ing new programs in response to each country’s specific security priority needs rather than having such priorities determined in Washington where the emphasis has been on preventing drug trafficking through the region.  In a Trump presidency, each foreign government will have to contribute more for U.S. security presence in the region – interdicting drug trafficking and assisting countries in patrolling their coastlines.  Assistance under the Obama administration to interdict gun trafficking (as limited as that has been) and to trace weapons used in crimes, or seized by law enforcement, and the sharing of “intelligence” will be significantly curtailed. A Trump administration will be beholden to the National Rifle Association to do nothing to curb the proliferation of small arms. The priorities for future programming will fall exclusively to U.S. government determination; and Caribbean governments will be obliged to take it or leave it.

A Trump administration’s approach to climate change and global warming will be to increase U.S. oil production and reduce reliance on alternative energy solutions.  This runs counter to the Caribbean Energy Security Initiative (CESI) launched by the Obama administration in June 2014.  The CESI, led by Vice President Joe Biden, recognized that there is no “one-size-fits-all” approach to reducing each Caribbean country’s individual energy dependence. 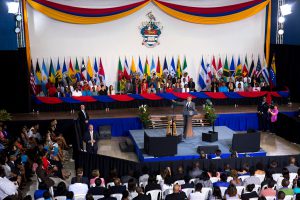 President Obama delivers remarks during a “Young Leaders of the Americas Initiative” town hall at the University of the West Indies. (Official White House Photo by Amanda Lucidon)

However, a significant objective of CESI is to reduce reliance on fossil fuels.  The program assists countries to put in place appropriate new legislation and regulations, and provide U.S. government-backed investment guarantees and access to finance through the Overseas Private Investment Corporation (OPIC) in order to attract U.S. investors in alternative energy solutions in the Caribbean.  The efforts promoted under the CESI has already resulted in major investments by American alternative energy companies in Jamaica’s and other Caribbean countries’ energy sectors and a lowering of reliance on imported oil and the use of fossil fuels, including coal for power generation.

I believe attempts by a Trump administration to implement candidate Trump’s promise to restore the coal mining industry in the U.S. will see the CESI as blocking the export of coal to Caribbean countries.  The damage to Caribbean environment and effect on global warming and climate change will not be given any consideration. I also believe a Trump administration will reduce lending and overseas investment guarantees by OPIC; keeping jobs in the United States.

Issues related to human rights and torture; implications for Caribbean immigration; and the  effects of religious profiling on immigration, including its possible implications for the citizenship by investment programs in some Caribbean countries, and the Young Leaders of the Americas Initiative will be discussed in future blogs.