Trump Presidency has Consequences for the Caribbean

(23 march 2017) — As a keen observer and analyst of American politics and government over the past several decades, I find the policies of the Donald Trump presidency so far to be disconcerting. Increased geopolitical uncertainty and instability across several regions now seem more probable than at any time in recent history.

American leadership generally, and its valuable financial contributions to international and regional organizations, such as the United Nations and the Organization of American States, as well as America’s financial support for the World Bank and the Inter-American Development Bank have served to facilitate global stability, and have contributed significantly to fostering democracy, rule of law, and economic development, including in Latin America and the Caribbean. A U.S. pull-back from a constructive leadership role in global affairs, including development assistance, will have unpredictable, long-term negative implications for world order.

The Trump administration FY2018 Budget, recently sent to the U.S. Congress clearly portends serious consequences for the Caribbean. The proposed cuts in the budgets of the U.S. State Department and the United States Agency for International Development (USAID), and the significant cuts in U.S. contributions to the United Nations and the World Bank will significantly affect resources available through these institutions for the region. A reduction in USAID bilateral assistance will mean reduction or elimination of programs which are not deemed to be priorities for the Trump administration.  So far, there is no indication that the Caribbean region will be a priority, and levels of funding for security-related programs, and bilateral and regional economic and social development programs are likely to be cut.  There is nothing in the early policy prescriptions espoused by the Trump administration that leads to an optimistic conclusion.

Caribbean governments and their diplomatic representatives in Washington will have to be far more proactive than any in other period in the history of relations between the United States and the independent countries of the region.  Considerable efforts will be required to protect current bilateral and regional programs from being decimated. There are friends of the Caribbean in Congress who could be natural allies of the Caribbean, and the enactment of H.R. 4939 which was signed into law by President Barack Obama on December 16, 2016, provides a basis for the Caribbean to build sound relationships with the State Department and Congress and help frame future Trump administration policy towards the Caribbean. There is also an important role for the U.S.-based Caribbean diaspora and civic organizations in advocating for a favorable U.S.-Caribbean policy. 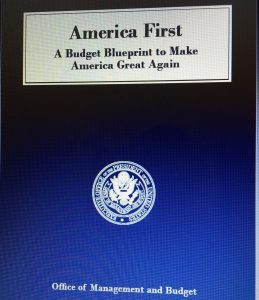 the Office of Management and Budget (The White House). So far what we have to go by is what is referred to as a Budget Blueprint (“America First – A Budget Blueprint to Make America Great Again”) which sets out the Trump administration’s proposed spending priorities. It provides us with a matrix of U.S. Government (USG) domestic and foreign spending priorities. There will be greater emphasis on projecting U.S. military strength abroad and less reliance on diplomatic initiatives to help stabilize global hot spots. President Trump’s policies are unpredictable and will create uncertainty as to whether the USG will act responsibly and with restraint within generally accepted international norms.

No one should be surprised with what could be a paradigm shift in U.S. foreign policy, even if such policy is incoherent at the moment. This shift in U.S. policy priorities reflect the bellicose rhetoric often heard during Donald Trump’s presidential campaign.  What is surprising is the level of cuts in Trump’s first Budget which will reduce significantly the capacity of the State Department to carry out its core mission.  Historically, American soft power has served America’s global interests best in times of peace. Thus this shift from soft power to projection of hard power is a policy doomed to failure; and there will be significant resistance in the U.S. Congress, even from a Republican Congress, as well as from the foreign policy community in Washington.  Even greater resistance from foreign friends and foes alike are expected.

It is an imperative for Caribbean governments to engage early with the State Department. There is a scramble underway to set its FY 2018 program priorities within the constraint of significantly reduced resources. The time to act is now! The Caribbean, comprising the U.S. “Third Border” can make a strong case for the USG to fund current programs going forward, in particular capacity-building programs related to security and law enforcement. Unfettered transnational criminal activities – drug trafficking, illicit arms trafficking, money laundering, human trafficking, and emerging radicalization and violent extremism in the region present security implications for the United States, as well as the Caribbean. Social intervention and economic programs are of equal significance in helping to reverse attraction to criminal activities by the youth population and to prevent violent extremism in some countries.

There is a strong case to be made that current programs maintain a virtual wall on the “third border” thus serving the mutual interests of the United States and the countries of the region.