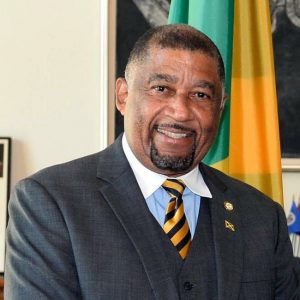 Today, I pay tribute to a great ex-Jamaican Prime Minister, Mrs. Portia Simpson-Miller, ON, Leader of the Opposition who, after 40 years of service in many roles to the People of Jamaica and the world, has announced a timeline for her departure as Leader of her Party and of the Parliamentary Opposition.

As she conducts her departure from the stage of leadership, long will we remember her achievements especially the ones that inspired and empowered women and young girls everywhere; as she rose as the First Female Leader of Jamaica. She forever broke the glass ceiling that impeded women from rising to the top. This is a task not yet completed in our friendly neighbor, America, where the expected rise of Mrs. Hilary Clinton and her hard fought campaign did not lead to accession to leadership of that country, or to becoming America’s first woman President.

On the world stage, Mrs. Simpson-Miller has met with many world leaders and built strong friendships and economic linkages across the Americas, Europe, Africa, and Asia, especially China and Japan. These have led to increased trade flows and Foreign Direct Investments in infrastructure such as Highways, Ports, and Tourism among other areas.

Politically, she has had many ups and downs. She led her Party in a landslide of populism in 2011, and (as Jamaica’s Prime Minister) in the ensuing 4 years the face of the Jamaican economy was changed from decline and fragility to one of fiscal stability and a platform for growth and development; that can be built on for future generations to come.

I am deeply indebted to Mrs. Simpson-Miller for her expression of confidence in me that resulted in my successful assignments to the Jamaican Foreign Service, first as Ambassador to China and later as Ambassador to the United States of America. It was a privilege to have served the people of Jamaica in this way. The experience has inspired me to continue to serve our country, by working to unite our people wherever they are across the globe and to work assiduously to uplift those who are poor, especially the vulnerable and the oppressed, while the country seeks economic gains.

We should never forget that she established the first Ministry of the Environment and Climate Change that placed focus on Jamaica’s most important and valuable resource, its pristine climate. Our Environment now seems to be about to be trampled on and damaged by the establishment of a massive coal-burning plant.

Under her watch, in global fora including the United Nations and the Organization of American States, Jamaica was credibly in the forefront of the struggle against Climate Change, Global Warming and the initiatives to deal with the plight of Small Island Developing States, such as Jamaica.

Mrs. Simpson-Miller should be assured that she is deeply loved and trusted by the people of Jamaica, across the political divide. Her legacy, yet to be fully defined, will no doubt be well spoken of even by her detractors as time and history will absolve her. We are deeply thankful for her service and dedication to the cause of providing equality of opportunity for all Jamaicans, for her role in advancing Jamaica’s economic development and for her insistence that the Diaspora be nurtured as full participants in our Country’s life and development, not simply seen as remitters of money. This was a Mission that I sought to carry out on my assignment to Washington.

The passage of time brings many changes, including Leadership changes. The World is changing, our Country is changing and we too are changing; but we must hold fast to those principles that truly make us Jamaican. We must become a more thankful people, because we have benefited from God’s Grace and protection.

Our People are travelling on a difficult road to development, have made many sacrifices and have many challenges ahead. In these times, visionary leadership and deep undying fidelity to the principles of our Constitution and the example of our Founding Fathers is required. Today, we pay tribute to Mrs. Simpson-Miller’s leadership that took us this far and as she passes the baton, we pray for God’s guidance on the process and the blessing of the emergence of a true and just Leader to replace her when the time comes.

Ambassador Ralph Thomas is Senior Teaching Fellow – Mona School of Business and Management – University of The West Indies, and former Ambassador of Jamaica to China and to the United States, and former permanent Representative to the Organization of American States.