Terrorists attacks on the United States: My initial response to 9/11

The day, 11 September 2001, for me began with attending the Sixteenth Annual International Prayer Breakfast, marking the opening of the Fifty-Sixth Session of the United Nations General Assembly.  As stated in the programme, the objectives of the Prayer Breakfast were:

To acknowledge the sovereignty of God over all peoples and nations;

To invoke God’s wisdom and blessing on those involved in the work of the United Nations.

Also on the programme was a solo rendition by South Korean Sookyung Ahn of “The Peacemaker’s Prayer” (Prayer of St. Francis of Assisi).  The words of the first stanza impacted me deeply, 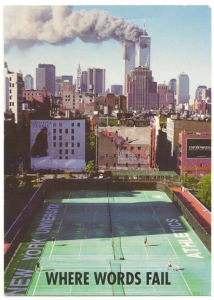 No sooner had I left the Prayer Breakfast and approached the Security Council Consultations Room that I was met by the DPR of Colombia, Ambassador Andrés Franco, who alerted me to the crash of the first plane in the NY World Trade Centre. He and others of my colleagues were standing in front of the TV in the SC Consultation Lounge watching the events as they were unfolding at the WTC.  I was just in time to see the attack on the Second Tower, as the airplane flew through the building and a burst of flame erupted.  This was followed by collapse of the buildings.   There was pandemonium as people ran in panic in efforts to escape the conflagration and collapsing buildings.

My thoughts then: Was this for real or a scene out of Hollywood?  Could terrorism hit home in the heart of America with such devastation?  Could all of this planning and execution escape the sophistication of US intelligence apparatus?  These are questions which no doubt crowded the thinking of millions around the world.  I also wondered if members of the human race could be so cruel to one another; as to take the lives of so many innocent people to further a political objective, or to avenge an act or perceived wrong.

I thought about the Prayer of St. Francis of Assisi, which had just a few moments before blessed my spirit and inspired me to do more for the cause of peace.  I remembered the words of the main speaker at the Prayer Breakfast that there can be “no justice with reconciliation.” This statement raised the question whether the principle of reconciliation and justice were mutually exclusive of each other.  I had some doubt and said to colleague ambassadors of Nigeria and Ghana, sitting with me at the table, “There can be no peace without justice.” 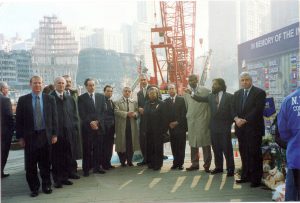 There was stunned silence in the small group standing there in the SC Consultation Lounge watching, what undoubtedly were the most outrageous terrorist acts of our time.  Those who commented could only speculate on the tragedy unfolding before us in disbelief that such a terrorist act was taking place in the great city in which we lived and worked.  I began to wonder what it would mean for America, the Security Council, the United Nations, indeed for humanity.

Ironically, the Caucus of the Non-Aligned Movement was scheduled to meet that morning to discuss a resolution lifting sanctions against Sudan.  The draft resolution was to be introduced in the Security Council consultations immediately thereafter, with a view to be voted on in a few days. The sanctions regime had been imposed on Sudan for harbouring terrorist groups in that country.  Several years ago terrorists operating from Sudanese territory had botched an attempted assassination of Egypt’s President Hosni Mubarak in Addis Ababa, Ethiopia. (The terrorist attacks on the U.S. Embassies in Nairobi, Kenya and Dar-Es-Salaam, Tanzania on August 7, 1998 were believed to have been planned and executed from Sudan. 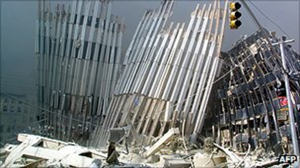 After watching television reports for a short while, I left the area to call my family members in Maryland and my daughter who was in New York.  The cell phone didn’t work.  I was reminded of the Verizon advertisement on television that “the call goes through when you need it most.”  Not this time; cell phone services were severely interrupted.

We were told the UN Headquarters could be a target of the terrorists and the building was evacuated. Back at the office I used the landline phone to contact family members who were relieved that I was safe, and I relieved that they too were safe.

As I thought about the events that were being reported – the hijackings of a number of commercial aircraft, the crashing of these planes on the WTC and the Pentagon, early reports of a car bomb explosion in the vicinity of the State Department, a hijacked plane crashing outside of Pittsburgh – I began to wonder and speculate as to the possible source of these terrorist acts.  My thoughts wandered to the well-known international terrorist, Usama bin Laden, who had vowed to destroy America.  His hatred of America was well documented.  We had been dealing with this issue in the Security Council with imposition of sanctions on the Taleban rulers of Afghanistan for harbouring bin Laden.  From his terrorist camps in Afghanistan, bin Laden controlled an international network of terrorists with the United States as the main target. 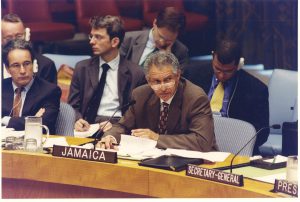 This attack against the United States was despicable.  It was an attack against the civilized world, against all of humanity.  My heartfelt sympathy was with the families who lost loved ones in these attacks.  Indeed, man’s inhumanity to man could not have been more manifest.  There is no justification for acts of terrorism, and all forms of terrorism should be condemned. I felt strongly that the international community must now marshal all necessary resources to put an end to terrorism. I intended to do my part.

But, as I considered the sophistication involved, and speculated on the difficulties that it would entail for a terrorist organization to plan and execute these terrorist acts, I began to wonder how much, if any, of the planning might have occurred on American soil.  I could not help but to remember the circumstances immediately following the bombing of the Federal Building in Oklahoma City just a few years earlier.  I remembered that the initial suspects were targeted because of their ethnicity and religious background.  I did not want to fall into that trap.  At this point of my thinking I decided to wait on the facts before forming a conclusion as to culpability.