(08 November 2017) — Over the past few months I have been raising alarm concerning the possible impact president Donald Trump’s budget cuts on the U.S. State Department were expected to have on USAID assistance programs and the Caribbean Basin Security Initiative (CBSI).  Now that the FY 2018 Budget is advancing in the U.S. Congress, Caribbean diplomatic efforts and Caribbean Diaspora political action must be intensified if there is any hope of maintaining FY 2017 spending levels or restoring any of the cuts already proposed by the U.S. State Department in its proposal to the Congress (Department of State, Foreign Operations, and Related Programs, Fiscal Year 2018). What is most important is that the Caribbean diplomatic corps in Washington and the Caribbean Diaspora across the United States must work in tandem on seeking a better deal for the Caribbean.

Before dealing with this issue of coordination and collaboration between the Caribbean Diplomatic corps and the Caribbean Diaspora, let me highlight what these cuts are and their likely impact on the region. The cuts proposed by the State Department belie its message in the proposal sent to Congress.  The State Department noted, “The Western Hemisphere is a region of vital interest to the United States. Diplomatic engagement in the region is a critical step to secure shared borders and to increase economic growth.” Further, while noting that the State Department’s goal is to advance U.S. national security and economic interests domestically and abroad, stated, “… citizen security programs directly bolster U.S. national security while supporting democratic institutions in the hemisphere. Drug trafficking, transnational crime and weak government institutions pose risks to the United States and to all citizens in the region.”

If these statements are to be taken at face value, and these statements are the true intent of the Department of State, one has to wonder how this policy squares with the budget cuts it proposed. Contrary to the stated objectives, overall assistance to the Caribbean region in FY 2018 will decline by 28% compared to FY 2016, that’s $221.015 million compared to $307.823 million.  Furthermore, there is a 37% cut in the CBSI program from $57.721 million in FY 2016 under President Barack Obama’s Administration to $36.200 million in FY 2018.  Also, among these cuts is the USAID Caribbean Development Program budget which has been reduced to zero dollars. The State Department noted that funding for this program had already been in decline, but the FY 2018 cut represents a 100% reduction.

A further breakdown of the overall Budget cuts on Caribbean countries revealed the following reductions: Jamaica (-90%), Belize (-84%), Bahamas (-52%), Dominican Republic (-51%), Trinidad & Tobago (-51%), Barbados & Eastern Caribbean (-41%), Guyana (-18%), Haiti (-17%), and Suriname (-7%).  Of the $221.015 million in the FY 2018 budget, $157.455 million is earmarked for Haiti, which also represents a 17% decrease. Furthermore, of the total allocation to the region, $110 million (almost 50%) will be for HIV/AIDS programs. When these cuts are considered alongside across-the-board cuts to regional programs and to regional and international organizations that provide certain services to the Caribbean, there is much to be concerned about. It is imperative for the Caribbean diplomatic corps and the Diaspora to respond.

There is a glimmer of hope, as I have learnt from a reliable source that the House and Senate Budget Committees’ Bills have both increased the cap for the foreign assistance budget submitted by the State Department. These Bills do not breakdown country-by-country assistance programs so restoration or increase in funding of each country program is not evident.  I have also learnt that the House and Senate Bills have restored CBSI funding to $57.7 million and $52.2 million, respectively, which would suggest a final figure probably in the $54 million range. However, that was not a done deal.

This opens an opportunity for restoring or increasing the country earmarks set by the State Department. However, this won’t happen unless there is strong and sustained messaging from the Caribbean diplomatic corps in Washington backed by Caribbean Diaspora voters across the United States. It is important that the Caribbean diplomatic corps in Washington inform their nationals across the United States on these issues and the importance of their support. 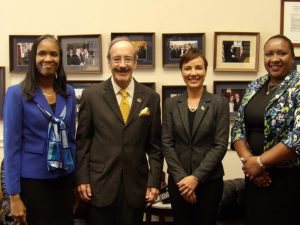 A week ago, the Minister of Foreign Affairs & Foreign Trade of Jamaica, the Hon. Kamina Johnson-Smith visited with Rep. Eliot Engel (D-NY), who, as the Ranking Member of the House Foreign Affairs Committee, was leading the charge for the Caribbean on a number of issues related to U.S.-Caribbean relations. Congressman Engel co-authored the United States-Caribbean Strategic Engagement Act of 2016 which sets the stage for Diaspora engagement in the policy-making process. His office worked persistently to restore funding for Caribbean assistance programs and for CBSI. I am also aware of the tireless work of Ms. Sally Yearwood, Executive Director of Caribbean-Central American Action, in her advocacy for the Caribbean on Capitol Hill.

Following his meeting with Jamaica’s Foreign Minister, Congressman Engel tweeted: “I assured Jamaican Foreign Minister I will fight to reject #Trump budget cuts to #Jamaica & entire #Caribbean.” Rep. Engel cannot do it alone.  We need all hands on deck!