(April 08, 2018) — As the pressure mounts on Nicolás Maduro’s regime many analysts no longer question whether his regime will collapse but when and exactly how it will happen. Russia’s role in Venezuela is still unclear, but I strongly believe that Russia does not want a military confrontation with the United States so far removed from Russia’s borders. Military engagement in Venezuela does not reach the same geopolitical and security levels of interest for Russia as Ukraine and Syria. At the same time, Russia is playing backstop to Maduro and his military supporters despite stern warnings from the United States.  Members of President Donald Trump’s foreign policy team’s firm warnings to Russia have elicited strong verbal responses from Russian Leader Vladimir Putin’s government.

The recent arrivals of Russian troops and military assets in Venezuela added a new dynamic for the region. There are contradictions in thought, perception, and reality. One line of thinking suggests Russia may be settling in for the long term. Such an undertaking would pose huge challenges for Russia. Moreover, there are no short term economic benefits to Russia and the Russian economy cannot sustain a Venezuelan engagement for the long term. Furthermore, while a base in Venezuela gives Russia an envious military footprint in South America it may not be feasible or sustainable over the long term should a military conflict emerge over control of Venezuela. 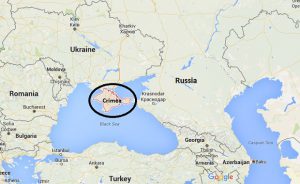 As noted above, Venezuela’s geographic location is quite different from the Crimea and Syria in Russia’s geopolitical and security sphere. Military engagement in Venezuela would pose a formidable challenge for the Russian military. The military logistics challenge would be untenable for Russia. It should be noted, also, that U.S. military leaders are not anxious for a military showdown with Russia’s military either, but would be prepared to prevent any major erosion of U.S. military hegemony in the Hemisphere. Perhaps the biggest unknown is what to be expected of President Trump if forced to face down President Putin militarily in the Hemisphere. No one wants to speculate.

In the meantime, the U.S. led by Secretary Pompeo and National Security Adviser John Bolton are warning Russia about any military engagement in Venezuela and demanding Russia removes its military from Venezuela. Pompeo’s predecessor at the State Department was famously told that only President Trump speaks for the United States and Putin may have his own direct line to the U.S. President. Let’s wait and see, and hope that a peaceful resolution of the Venezuelan crisis remains on both the U.S. and Russia’s agendas.

It’s a bit of irony that even as Russia is now accusing the Trump Administration of trying to engineer a coup against Maduro, Russia may be doing the same but for different reasons. The U.S. has been trying for decades to install a friendly government in Caracas, and the Trump Administration’s role in the current crisis points to no discernible change in U.S. policy. As a matter of fact, removing Maduro from power, by whatever means, is the only option pursued by the Trump Administration from day one of his administration. The failed 2002 attempted coup against Hugo Chavez was said to have been supported if not engineered by the U.S. government, led by the Central Intelligence Agency (CIA).  The concurrent U.S. isolation of Venezuelan military leaders who supported Chavez then and Maduro now is that they were forced into reliance on Russian military supplies and support.

U.S. policy on Venezuela has created an opportunity for Putin fueling his desire to expand Russia’s influence globally. The extent to which Putin will test Trump is anyone’s guess.

In the meantime, the United States and Russia took the Venezuela crisis to the UN Security Council (UNSC) where the outcome was predictable. Given their prior positioning on Venezuela, chance of a compromise was highly improbable.  They didn’t disappoint and the outcome was not surprising. The UNSC after two days of debate and voting on competing draft resolutions the UNSC reached a stalemate with no plausible means to overcome the veto power of either side. A clearly divided Council voted to reject the two separate draft resolutions presented by the United States and Russia.

Notably, neither the American nor the Russian draft resolutions determined that the situation in Venezuela is ‘a threat to international peace and security’ which is required for meaningful action by the UN Security Council under Chapter VII of the UN Charter. In my view the intent of both the American and Russian draft resolutions was primarily to present political statements reflecting either sides of the crisis in Venezuela. Neither side expected any meaningful result. The lines are clearly drawn and the UN Security Council is at a stalemate.

Given the UNSC Rules, the U.S. resolution would have been adapted by the required nine votes were it not for the vetoes exercised by Russia and China. On the other hand, the Russian resolution received only four votes in favor and would have failed even without the veto votes of the U.S., France, and the United Kingdom. The vote for the U.S Resolution was 9 in favor, 3 against, and 3 abstained. As expected, the two current representatives of the Group of Latin American & Caribbean States on the UNSC – Dominican Republic and Peru – sided with the United States.  South Africa joined China and Russia in voting against the U.S. draft resolution. The vote on the Russian resolution was 4 in favor, 7 against, and 4 abstained. South Africa and Guinea Bissau joined China and Russia to vote for the Russian draft resolution; the Dominican Republic abstained.

Reminiscent of the Cold War rivalry between the United States and the Soviet Union (now U.S. and Russia) which played out in numerous conflicts in Africa and Asia, the UNSC will remain in a stalemate. The UNSC will be called on later to facilitate a process of peacekeeping and peace-building but only after the people of Venezuela have suffered untold misery, probably thousands of lives lost, and the country’s economy and institutions destroyed. For now, given the distance between both sides, there is no immediate role allowed for the UNSC in resolving the Venezuelan crisis.

(Note: Members of the Caribbean Community (CARICOM) were well represented among the 38 UN Member States which participated in the UNSC debate on the Venezuela situation on Feb. 26, 2019, two days before the votes in the Council. The Representative of Suriname spoke on behalf of 10 of the 15 CARICOM Member States; and the Representatives of five of these States also spoke on their own countries’ behalf. Noticeably absent from the Council debate were the Bahamas, Guyana, Haiti, and Jamaica (Montserrat is not a Member of the UN). More later on what UN Member States, including CARICOM Members, had to say on the situation in Venezuela.)