Slavery: A Human Tragedy and Crime against Humanity

(07 December 2017) — The perpetrators of crimes against humanity – human trafficking and slave trade – taking place in Libya must not go unpunished. Many countries had been aware of these egregious acts for some time and had remained silent. The United Nations community, and thus all UN Member States, was warned by the International Organization for Migration (IOM) on April 11, 2017 when Leonard Doyle, chief IOM spokesman in Geneva sounded the alarm. Doyle said then that “Migrants who go to Libya while trying to get to Europe, have no idea of the torture archipelago that awaits them just over the border.”

Doyle said that trafficked victims from several African countries “…become commodities to be bought, sold and discarded when they have no more value.” He pointed out that hundreds of migrants along North African migrant routes are being bought and sold openly in modern day slave markets.

United States political leadership, as well as the leadership of most countries around the world failed to respond with outrage and firm action to end these activities in response to this revelation by the IOM. There has been practically deadly silence from governments around the world on this crime against humanity. Yet the United States ranks countries around the world each year on the levels of action taken by them to prevent and end human trafficking. On this issue the expected moral outrage by the United States is absent. While it might be too much to expect of a State Department in disarray, and from a White House whose moral leadership has been questioned constantly, there is also no outrage from the U.S. Congress.  Also, there is no outrage from members of the Congressional Black Caucus.

The voices of Caribbean governments and CARICOM are virtually non-existent. Had there not been a CNN exposé most would have remained silent. Some are responding now in an attempt to keep pace with the outrage being expressed on social media platforms. 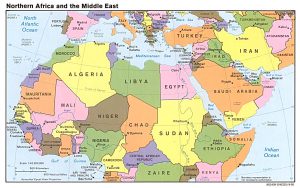 North Africa and the Middle East

The UN High Commissioner for Refugees (UNHCR), Filippo Grandi in a briefing to the United Nations Security Council on Libyan slave trade markets, told the Council on November 28, 2017 that more than 116,000 people had crossed the sea from North Africa to Italy in 2017; and refugees were fleeing conflict situations in droves. He stated that the international community’s inability to prevent and resolve conflicts fueled the refugee situation with refugees being exposed to “…grave abuses perpetrated against migrants and refugees along the central Mediterranean routes….” He said, “Compelled to flee, but without legal pathways to safety, refugees are exposed to appalling harm, together with migrants, including torture, rape, sexual exploitation, slavery and other forms of forced labor, which proliferate where governance is weak and transitional criminal networks take root.”

Lack of governance in Libya provides safe haven for perpetrators of these nefarious acts. Mr. Grandi told the Council there were presently 17,000 refugees and migrants held in detention camps in Libya; and that “many more were held by smugglers and traffickers who are protected by well-known militias.”  William Lacy Swing, Director General of the IOM, also briefing the United Nations Security Council, said that since the Libyan crisis, the IOM had been trying to empty the detention centers in Libya.

I should add here that many of the victims of human trafficking start their journey from Sub-Saharan Africa as part of human smuggling operations and end up as victims of trafficking.  Many are trafficked and held in detention when they are unable to pay exorbitant fees which are increased as they are transferred from one smuggler or trafficker to another. Many end up being sold as slaves to satisfy these fees; many others die even after paying their smugglers.

In 2008-2009, I led a Joint UN-ECOWAS Mission in West Africa to investigate the disappearance of over fifty West Africans who were being smuggled and disappeared in The Gambia. These West Africans were being smuggled from the shores of Senegal to southern Europe. More than 40 were killed in The Gambia as their smugglers decided to end their journey in that country. There was impunity for these heinous acts as there are for most perpetrators.

Following the briefings by Mr. Grandi and Mr. Lacy, there was the usual response from Security Council members calling for an end to impunity, including through investigations by the Prosecutor of the International Criminal Court (ICC).  Many speakers welcomed efforts to ensure humane treatment for migrants and refugees, including those initiated by IOM and UNHCR.  Several speakers also called for support for the Libyan Government’s efforts to solidify its institutions, including the security sector, while underlining the need for a political solution to the situation in Libya.

It would be instructive for us to know how long this information has been known and kept quiet by the United States and other Western countries. Similarly, African countries where these victims originate – smuggled or trafficked – must have known about the modern-day slave markets in Libya. The ICC Prosecutor has been slow to act, yet slavery and the slave trade are crimes against humanity.  Recently, the President of France visited West Africa to engage on this issue and perhaps there will be meaningful response. There are many questions demanding answers from many quarters for ignoring these egregious acts without an appropriate response from political leadership around the world.

There is a tendency to ascribe blame for the situation in Libya to the Barack Obama administration and in particular to former Secretary of State Hillary Clinton.  No doubt there is enough blame to go around. Former Secretary of State Gen. Colin Powell warned President George W. Bush as the U.S. president contemplated invading Iraq in 2003, “If you break it, you own it.”  While there may have been a genuinely good reason for the U.S. and NATO to help bring down the Muammar Qaddafi regime, there is an obligation not to abandon a country that is destroyed under such circumstances, especially when the country lacked institutions of government in the first place.

Qaddafi had threated to annihilate tens of thousands of Libyan citizens who opposed his oppressive regime and he had unleashed his military against defenseless civilians. The lessons learnt from the Rwanda massacre of 1994 and the Srebrenica massacre of 1995 meant inaction could not be repeated. The global community had pledged “Never again!” The United States and the West failed to respond in the face of impending massacres in both Rwanda and Srebrenica. Over 800,000 Rwandans (Tutsis) and 7,800 Bosnian men and boys (Muslims) were slaughtered because governments with the requisite capacities failed to act. It was not surprising that a similar scenario in Libya could not be ignored. The UN Security Council adopted Resolution 1973(2011) approving a “no-fly zone” over Libya, and authorized UN Member States to use “all means necessary” to protect innocent Libyan civilians from impending slaughter by Qaddafi.

The UN Security Council provided the imprimatur for military action by the U.S. and NATO. As always the problem is after the bombs stop dropping and the guns are silent. Libya is yet to recover and the Libyan government has limited control over its territory, great swathes of which are controlled by militias.  The entire international community has an obligation to help in Libya’s restoration and ending slavery.