Questions I would have asked Jamaican Prime Minister Andrew Holness

(29 Nov. 2018) — As a Host of CaribNation TV, I requested an interview with Jamaican Prime Minister the Most Hon. Andrew Holness to take place during his visit to Washington DC from November 25-29, 2018. With the expectation that I would have the opportunity to sit down with the Prime Minister, I was asked to submit the subject areas for the interview which I provided in great detail. I was later informed that the Prime Minister’s schedule would not permit time for an interview.  There seemed to have been a change and, subsequently, I was advised that the interview would take place on Wednesday afternoon (Nov. 28th). We waited for the call but the interview never happened! 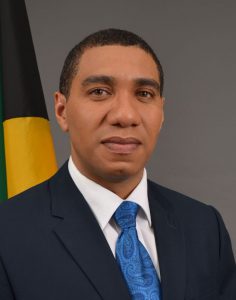 According to the Prime Minister’s Facebook page, his schedule included a number of important meetings and events. He referenced, in his own words, meetings with “senior lawmakers in the U.S. Capital” – Senators Ted Cruz and Marco Rubio. He also met with Members of the Congressional Black Caucus; and met with Treasury Secretary Steve Mnuchin and Housing and Urban Development Secretary Dr. Ben Carson; as well as having “an exchange” with Vice President Mike Pence and Senior White House Adviser Jared Kushner. In light of the Prime Minister’s several engagements, Jamaica and the Caribbean, as well as the Jamaican Diaspora anticipate details of these meetings, and the benefits thereof, will be forthcoming from the Prime Minister.

One of the major economic issues which defined your – Prime Minister Holness’ – government when you took office in 2016 was your pledge to grow the economy – your 5 in 4 program was highly publicized and promoted as achieving 5% economic growth in 4 years.  After two-and-a-half years in office, and growth in the Jamaican economy not on track to achieve the stated goals, I had two questions for the Prime Minister:

How would you – Prime Minster Holness – describe your government’s success so far in achieving the goals of the “5 in 4”in the time-frame you had established?

If those goals are no longer achievable, why not, and what are your government’s plans going forward?

There has been impressive infrastructure development taking place in Jamaica for the past several years which the current government has continued at an impressive pace. Most of the financing for these infrastructure projects have come from the Chinese.  As you (Prime Minister) are no doubt aware, the Trump Administration has expressed very strong opposition to China’s engagement in the hemisphere and has warned countries in the region, thus characterizing China’s engagement as predatory economic practices.

How does your government respond to these charges, and do you expect to push back on the U.S. on China’s engagement in Jamaica?

Is there an available alternative to Chinese investments in Jamaica? If so, what are the alternatives?

Do you have any suggestions for the Trump Administration with regard to China’s role in the region?

The Trump Administration’s trade disputes which some have characterized as a trade war could have serious impact on Jamaica and other countries in the Caribbean region.

Do you see such impact of U.S.-China trade war as negative, or creating new opportunities for Jamaica and the Caribbean region?

If the latter, what might be some of the opportunities?

The Caribbean Energy Security Initiative (CESI) launched in 2015 by President Barack Obama’s Administration aimed to boost energy security and economic growth as part of the Obama Administration’s support for alternative energy resources and Climate Change resilience.  Jamaica has benefited significantly from CESI, especially with regard to conversion to natural gas for power generation across a broad spectrum of energy consumption in Jamaica. The Trump Administration, denying the effects of Climate Change, is on record as promoting fossil fuels and has shown disdain for alternative energy sources.

Do you have a message for the Trump Administration on the threat of Climate Change on Jamaica and the Caribbean?

Will you impress on the Trump Administration the importance of guaranteed LNG supplies and support for alternative energy development in Jamaica and the Caribbean?

As you – Prime Minster Holness – are very well aware, the Trump Administration had proposed a 30% budget cut for the State Department and USAID FY2018 budgets.  There was almost a 50% proposed cut in the Budget for the Caribbean Basin Security Initiative (CBSI).  The CBSI has provided significant capacity building for the security and law enforcement sectors in Jamaica and the Caribbean since it was introduced in 2010 by President Barack Obama.  As a result of extensive lobbying by friendly members of Congress and members of the Jamaican/Caribbean Diaspora, as well as by the Caribbean diplomatic corps, the U.S. Congress overrode Trump’s budget cuts and reinstated the funding. The CBSI programmes have served the mutual security interests of the region and of the United States.

With a Democratic Party controlled U.S. House of Representatives where Jamaica and the Caribbean have many friends, including the incoming new Democratic Party Chairman of the House Foreign Relations Committee, will your Government be reaching out to the new House leadership to protect Jamaican and Caribbean interests?

As you – Prime Minister Holness – are well aware, the high crime and murder rates in Jamaica have been quite troubling. Members of the Diaspora are very concerned about their safety when visiting Jamaica and of the safety of the Jamaican public generally. Recent reports about attacks on some tourists create special problems for the tourism sector and possible negative effect on the Jamaican economy.

Please tell us what steps are being taken in the near- to long-term to protect the Jamaican public and visitors from criminal elements in Jamaican society.

According to the Government’s data, the states of emergency and the zones of special operations (ZOSO) have had an impact on the murder rate in Jamaica – the numbers of homicides have decreased.

Are states of emergencies and ZOSO considered long-term solutions to crime and security in Jamaica?

How long does your Government plan to keep these measures in place?

What long-term measures are you contemplating, or are being implemented?

Members of the Jamaican Diaspora are disappointed that neither your government nor preceding governments have found effective ways to engage the Diaspora in a meaningful way. Many in the Diaspora believe the Jamaican Government is mostly interested in the $2 billion per year remittances and the many Diaspora social intervention programmes, in particular assistance in the health and education sectors.

Can the Diaspora expect a Government Diaspora policy that has broad input from Diaspora leaders and communities across the United States?

Jamaican and Caribbean Diaspora members – professionals and others – have extensive experiences engaging with U.S. policy makers, in particular with the U.S. State Department and the U.S. Congress. Diaspora professionals have provided these services because of their patriotic fervour for their original homeland, and they will continue to do so. At the same time they have watched as governments from the region engage the services of others to help influence policy and decision makers while ignoring the value of Diaspora expertise.

Does your Government have, or is your Government developing a policy which includes engaging Diaspora expertise and professionals to provide their services in influencing U.S. policy and decision makers?

Members of the Diaspora are concerned that the Diaspora is denied any role in the governance and policy-making of respective Jamaican Governments.

Do you have any plans to increase Jamaican Diaspora input in governance in Jamaica?

If you do, could you elaborate?

If you have no plans to do so, why not?

Prime Minister Holness, I should be grateful if you would answer these questions.