The Most Honourable P. J. Patterson

Former Prime Minister of Jamaica and

Statesman in Residence of The Patterson Centre

(22 June 2021) — The passing of Kenneth Kaunda marks the final departure from the stage for a generation of iconic Leaders whose dedication to the independence of their respective countries extended well beyond their national frontiers in order to achieve the eradication of colonial rule and attain full sovereignty for the African Continent.

Kenneth Kaunda is the undisputed Father of Zambia which marked the disentanglement of Rhodesia and the eventual collapse of the Universal Declaration of Independence by Ian Smith.

“KK”, as he was affectionately called, belonged to the profession of Teachers and his domestic policy emphasized the absolute primacy of a sound education at every stage of learning.

Wherever he appeared, smartly dressed and in his own charming style, he would in his fine and persuasive presentations, articulate the urgency of freedom and liberty for those who had suffered long ago from slavery, imperialist exploitation, and the abomination of apartheid. 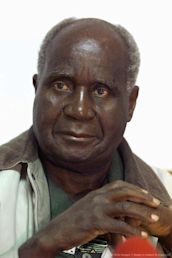 We in Jamaica will always remember him fondly for his attendance in Jamaica for the 1975 CHOGM.

As one who was Foreign Minister during those years, I will always remember his calm during periods of international turmoil and regional turbulence. Whenever he was called upon to articulate the case for the Developing World in the halls and corridors of the United Nations, as he was often required to do during his tenure as President of the Organisation for African Unity (OAU), his urbane presentations always commanded respect. He was a formidable Force in the Non-Aligned Movement.

President Kaunda was a colossus. It is fitting to recognize, at this time, the true measure of the man. He was a pioneering Leader, a proud Nationalist and a Pan African visionary. He recognised that no one could be free in the African Continent which had contributed so much to human civilisation while others were shackled to a colonial chain or languishing in jail because of the colour of their skin.

Where will he be best remembered?

For me there can be no doubt. It was his masterly and adroit chairing of the Commonwealth Heads of Government in Lusaka, 1979. It was there he, with the astute support of Secretary General Sonny Ramphal, and the vigorous backing of Julius Nyerere, Michael Manley and Malcolm Fraser, broke Margaret Thatcher’s obstinacy, in order to secure the critical breakthrough which resulted in the Lancaster House Conference for an Independent Zimbabwe.

As a “front line State’, his mission would not end until true freedom was won for all the countries of Southern Africa. Such a courageous stand restricted the considerable development challenges for Zambia, a land-locked country dependent on the export of copper which experienced price volatility. He was never afraid to pay the price for his abiding principles.

He supported the liberation struggles in Angola, Mozambique and Zimbabwe and South Africa’s repeated interference and unlawful control in Namibia.

History cannot ignore his unrelenting hostility and unwavering support in the struggle against Apartheid which eventually concluded with the election of Nelson Mandela as President of South Africa in 1994.

In his robust determination to obtain maximum value for its main export, copper, President Kaunda was forced to confront the stranglehold of a capitalist market which was bolstered by the policies of General Pinochet in Chile which stifled Zambia’s thrust for adequate returns to the Treasury.

lt is difficult to explain the odds and obstacles which he had to overcome.

Landlocked, severe imperial exploitation in a Continent so richly endowed with an abundance of resources that for ages condemned its people to the legacy of dehumanising and deprived them of the basic rights to earn the benefits which should accrue to its people – leaving behind a trail of poverty, hunger and disease.

“KK” regarded himself as a Humanist – He was graceful and persuasive, but stubborn in the belief that we were gifted with those innate talents which entitled us to the rights of marshalling our collective will to determine our own destiny.

We have lost the last iconic African Leader of a generation – Nkrumah, Nyerere, Samora Machel, Kenyatta, Lumumba, Robert Mugabe, Mandela, Sekou Toure – determined to remove colonial rule from the entire Continent of Africa and to build from shore to shore an entire continent where peace, brotherhood and justice reign supreme.

He has completed his earthly journey and now enters the celestial pantheon of legendary heroes.