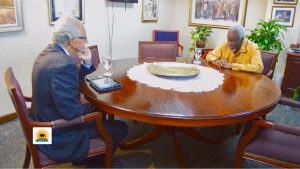 P.J. Patterson, In His Own Words – Interview with CaribNation TV

I sat down as CaribNation TV Host with the Most Honorable P. J. Patterson, former Prime Minister of Jamaica at his New Kingston Office in Jamaica in July 2017 for a conversation which covered a broad range of issues.  This conversation with the former Jamaican Prime Minister occured while the Jamaica 55 Diaspora Conference 2017 was underway at the Jamaica Conference Centre in Kingston, attended by over a thousand Jamaicans from the Diaspora.

In the CaribNation TV video link below our conversation explored issues such as, the role of the Jamaican Diaspora and related issues of participation in the governance of Jamaica, including Diaspora voting; his own government’s initiative in 2004 to engage with the diaspora; status of decisions taken at the 2015 Diaspora Conference; as well as the lack of an appropriate mechanism to take advantage of diaspora expertise. Mr. Patterson also expressed some views on how the Diaspora can help Jamaica in the countries in which they live.

Mr. Patterson also shared his perspectives on CARICOM and regional integration, and was asked to comment on the perceptions of leadership deficit in the region.  He offered his perspective on the way forward in dealing with Brexit and future Caribbean role as a part of the ACP group of countries.

I found Mr. Patteron’s views on the future of sports in Jamaica and the Caribbean offered some exicitng prospects.

Mr. Patterson did not shy away from addressing issues of concern with the political  dynamics in Washington DC, including the issue of Donald Trump’s wall as it relates to the Caribbean diaspora and the Caribbean.

All of the foregoing issues and more, in Mr. Patteron’s own words are covered in the video link below.

© 2017 Curtis A. Ward/The Ward Post (Except for the video contents which are the property of CaribNation TV.)