(24 June 2017) — In a dramatic “in your face” challenge to supporters of the Nicolás Madura government and the status quo in Venezuela, OAS Secretary General Luis Almagro offered to resign, in response to calls for his resignation as a precondition for Venezuela’s return to the OAS. He said, however, that his resignation would be predicated upon significant changes in governance, restoration of democracy and rule of law, and the protection of human rights in Venezuela. Setting a significantly high bar, in a statement released today, Almagro said:

“ I will resign from the General Secretariat the day that free, fair and transparent national elections are held without impediments and with international observation; when all of the political prisoners named by Foro Penal Venezolano are freed; when all of those in exile are allowed to return home; when the full authority of the National Assembly is returned; when a humanitarian channel is established to help the most vulnerable Venezuelans; and when all those responsible for murdering the protesters, including those in the chain of command are brought to justice.” 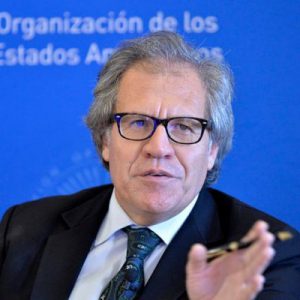 Court; when there is an independent National Electoral Council; and when the unconstitutional National Constituent Assembly is halted.”  His bottom line is that he would “resign in exchange for freedom in Venezuela.”

If Almagro is to be taken at his word, it is now left to those countries that blocked the resolution in Cancun that would have approved a proactive OAS role in seeking resolution of the Venezuelan crisis.  Those who opposed the resolution argued it was an attempt by certain OAS member states to “interfere” in the internal affairs of Venezuela. Moreover, Almagro has set a politically unrealistic, unachievable high bar.

The question now arises: are those countries willing to take the lead, and are they capable of helping Venezuela achieve the objectives outlined by Almagro?  Unless, of course, they believe the people of Venezuela can settle their differences among themselves without an outright civil war.  One could stretch optimism to believe this was possible. But when one considers the prevailing conditions – lack of independent democratic governance and justice institutions and curtailment of free speech and peaceful assembly, then it is most improbable for a peaceful homegrown solution which protects the fundamental human rights of the people of Venezuela.

Then again, perhaps these countries may not themselves be able to meet some of the standards set by Almagro in their own countries and are incapable of contributing very little to help Venezuela. Is the ball really it their courts now?