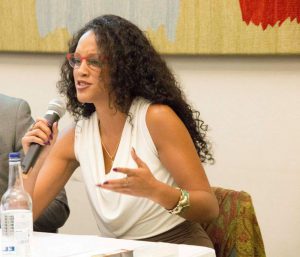 Lisa Soares at Jamaican Youth Forum in the UK

I spoke recently at the Jamaica Youth Forum UK 2016, at Portcullis House, UK Houses of Parliament on “Harnessing the Power of the Diaspora: The Global Jamaican Immigration Card” providing my perspective on this new initiative by the Economic Growth Council (EGC).

Given the political, legal and global implications of this proposal, I was a bit apprehensive to speak on the subject—especially with little proposed context as to how this policy would be implemented,  and more importantly the participation of young members of the Diaspora  (2nd,3rd, and even 4th generation Jamaicans). However, given the current political climate and state of world affairs, Brexit and Trumpism (as I’d like to call it), focused on insularity and isolationism, the Global Jamaican Immigration Card (GJIC) deserves consideration.

As we all know, Jamaica has experienced little to no growth since the 1970s. So, the current administration should be commended on this initiative to put Jamaica on a path to economic success. The EGC has been dubbed an all hands on deck approach bringing together all stakeholders with an interest in Jamaica’s growth around eight initiatives, one of which is to “Harness the power of diaspora.”

The Jamaican Diaspora defined as “…persons who migrated from Jamaica as well as second, third, and 4th generation progeny born in the countries to which their parents and grandparents-parents migrated. The only thing which separates them from Jamaicans in Jamaica is geography, but for all intents and purposes they are one” (Source: The Jamaica Diaspora Working Together as One, 2015. Delano Franklyn, former Minister of State)

This is consistent with what Hon. P. J. Patterson (then Foreign Minister of Jamaica) articulated in the mid- to late 1970s: “Jamaica is a country without borders” (See also Ambassador Ward 2016 – Engaging Caribbean Diaspora: The Jamaican Experience.) Clearly, Jamaica’s global Diaspora has a significant role in our island’s development.

The EGC proposed amending the Immigration Act to facilitate the issuance of a special GJIC to members of the Jamaican Diaspora. All persons born in Jamaica or of Jamaican parentage or heritage would be eligible to hold the card and it would provide all the benefits of Jamaican passport holders (except the right to vote). The purpose would be to encourage the Diaspora to return, get involved, and invest in Jamaica.

According to Minister of Foreign Affairs and Foreign Trade, Senator Kamina Johnson Smith, this proposal is in response to concerns of overseas Jamaicans about the hassles they often face when they come home to do business. “It will allow (diaspora members) especially second and third generations and beyond to be connected through this card.” Johnson Smith noted.

On its face the GJIC seems to be an important proposal, but with no specifics given by the EGC or the Government it raises questions regarding implementation and oversight parameters, primarily infrastructure and management capacity, and what qualifies Diaspora members for this program. It is perhaps because I have been in the diaspora trenches for a while, and as a student and practitioner of policy and politics, that I offer some caution to the EGC and the government on said proposal.

I along with others from diaspora leadership are not aware of any EGC consultation, or plan for consultation with the Jamaican diaspora on modalities or mechanisms for engagement. Nevertheless the EGC quite rightly identified the Diaspora as representing a “very powerful reservoir of capital, relationships, skills and expertise that remains largely untapped.”  But, I have a few questions/concerns regarding the GJIC proposal:

Of equal importance, Jamaica is dealing with the impact of mass deportations from the UK and the USA which is likely to increase with the onset of Brexit and Trumpism. Arguably, crime in Jamaica is directly related to deportations without Jamaica having in place an effective protocol to manage or support criminal deportees. Could the proposal result in an open-border policy with a possible risk of uptick in violent crimes or nefarious acts?

I do not intend to convey a gloom-and-doom picture, but I think it’s important to be critical. I am a bit weary of repackaged or reinvent-the-wheel proposals when the Deputy Chairman of the EGC noted, “…the good news is that the solutions to Jamaica’s problems are not unknown. They lie in copious reports, studies, commission findings, ministry papers and executive plans that lie in the filing cabinets of government.”

For sure, Jamaica needs investment and an all hands on deck approach if any of these policy proposals are to work. I offer two recommendations that do not require an extra outlay of capital investment as the infrastructure and management protocols are already in place.

The Mapping Project was largely unsuccessful for a number of reasons (the first being the loss of understanding and tapping into what diaspora really means). Diaspora is not just a set of elites that sit in a board room and advise the Government. Diaspora is all of us, generations of Jamaican that have an interest in Jamaica’s well-being. Simply, we need to get back to diaspora basics.

Many diaspora practitioners including myself believe the summary of recommendations of the EGC suggesting a newly defined mechanism for engaging the Jamaican Diaspora is a good start.  Members of the Jamaican Diaspora, as well as Diasporas of other Caribbean countries, will be watching us very closely (Ambassador Ward 2016).

As young Jamaicans in the diaspora, we can ensure a level of cross-collaboration on policy perspectives such as these, given the many social platforms in place and the mechanisms that already exist to gauge the power, strength and capacity of the youth diaspora to invest. You will hardly find a Jamaican, especially a young Jamaican in the diaspora that does not want to give back to Jamaica; because we love Jamaica.

At the same time, we need to hold each other accountable and hold our leaders accountable as we move towards implementation. I’m tired of the talk shops— the time for action is now. As I said to the Youth Forum,

“We cannot sit idly by. Within a sea of fear of isolationism our country is looking outwards for growth. That is how Jamaica was built. The onus is upon us, the youth. We are the change-makers, and the world is changing. What type of world do we want? What type of Jamaica do we want?”

“As youth in the diaspora, we can help the vision of harnessing the power of the Global Jamaican Diaspora and invest to make sure the people, our people and our home are on a path to sustainable and successful development.”

The Ward Post welcomes Lisa Soares, a Diaspora Youth Leader, who will be sharing her perspectives as a Guest Blogger on TWP.