(21 July 2017) — As pointed out by Representative Eliot L. Engel (D-NY), Ranking Member of the House Committee on Foreign Affairs, in his opening remarks at the Committee’s hearing on implementation of the U.S.-Caribbean Strategic Engagement Act of 2016 – Public Law No: 114-291 (the Act) on July 19, 2017, having received the U.S. Strategy for Engagement in the Caribbean (the Strategy) report submitted by the Department of State a month earlier, implementation will be the hard part. Implementation of the Act, which was the first step in prioritizing U.S.-Caribbean relations, is up against the budget cut proposed by President Donald Trump and Secretary Rex Tillerson.  In addition to across-the-board cuts, funds for the Caribbean Basin Security initiative (CBSI) faced a 37% cut and funding level of $36.2 million.

The good news for now is that following a bipartisan letter written to the Appropriations Committee by Representative Engel joined by Representatives Ileana Ros-Lehtinen, Yvette Clarke, and Mia Love rejecting the cut, the Committee announced on July 19th that the CBSI will be funded for FY2018 at the FY2017 level of $57.7 million.

In stressing the importance of the Caribbean diaspora, Rep. Engel noted that the Act provides for consultation with

In response to the Act’s mandate I prepared a detailed paper, in my capacity as Chairman of the Caribbean Research & Policy Center (CRPC), in mid-June 2017, “Security Imperatives & Cooperative Partnerships in US–Caribbean Relations”, analyzing U.S.-Caribbean security imperatives in which I drew attention to the importance of the CBSI to U.S. and Caribbean security. The CRPC paper which was circulated to the State Department and on Capitol Hill prior to the State Department’s preparation of the U.S.-Caribbean Strategy report, inter alia, raised the following points with respect to the CBSI and the proposed budget cut:

The Committee hearing, which was arranged to hear from the Department of State the details of the Strategy, received a briefing from Ambassador Kenneth Merten, Acting Principal Deputy Assistant Secretary in the Bureau for Western Hemisphere Affairs. 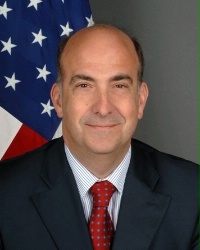 Noting that the Caribbean region is the United States’ “third border,” Ambassador Merten stated that the relationship “is characterized by common interests and societal ties that yield daily benefits for our countries’ shared prosperity, but also common security threats as well.”  He characterized the Strategy as a “multi-year strategy” which “establishes a framework for enhancing U.S.-Caribbean relations in six broad areas: security, diplomacy, prosperity, energy, education, and health.”

Specifically, on security, Ambassador Merten said the State Department “will work with Caribbean governments to strengthen regional security and advance the safety of our citizens by pursuing programs to dismantle transnational criminal organizations, curb the trafficking and smuggling of illicit goods and people, strengthen the rule of law, improve citizen security, and counter vulnerability to terrorist threats.”  In light of the Appropriations Committee’s announcement of continued funding of the CBSI at the FY2017 level, this will be an important undertaking by the State Department and one with which Caribbean governments can find solace.

Ambassador Merten also explained the future course of the Strategy in the following: support of U.S. exports and job creation and engaging with Caribbean partners to promote sustainable economic policies and job-creating, private sector-led growth in the Caribbean; seek to increase the use of low cost, reliable sources of energy to spur economic development that will create new opportunities for globally competitive U.S. energy firms and exports; promote educational and cultural programs between the Caribbean and the United States, that build stronger economic partnerships, counter vulnerability to crime and extremism, promote the export of U.S. higher education services, and advance cooperation in science, technology, and development; will serve U.S. national and security interests by improving health security, advancing public health, and strengthening resilience to emergencies and disasters in the Caribbean.

According to Ambassador Merten, the Strategy was developed in consultation with the USAID by establishing and consulting a multi-stakeholder group that included members of the Caribbean diplomatic corps, the Caribbean diaspora, private sector, civil society, and at least 18 other government agencies.  Consultation with the Caribbean diaspora has taken on new meaning with the mandate of the Act. In addition to the input by the CRPC, the Institute for Caribbean Studies (ICS) held a forum at the State Department to engage with members of the Diaspora to discuss and formulate recommendations for consideration in preparation of the Strategy.

Going forward, Ambassador Merten informed the Committee that “the Department has already developed an internal process to implement this Caribbean strategy. This process relies on the same multi-stakeholder group that provided input for the strategy itself. We have established interagency working groups on security, diplomacy, prosperity, energy, education, and health that have already begun meeting to plan and implement the various goals and initiatives featured in our strategy. We have designed an internal system for tracking the progress of these working groups, which we will use as the basis for the administration’s two-year update to Congress under the Act.”

It will be important the level of input sought in the future from the Caribbean diaspora in deliberations of the working groups of the State Department, and to what extent such input is integrated in execution of the U.S. Strategy for Engagement in the Caribbean.