(Nov. 01, 2016) — No Caribbean government, as of this writing, has found an effective and workable formula for engaging effectively with each of their respective diaspora communities.  There has been a lot of talking but very little consistent action.  The resources and expertise of Caribbean diaspora communities remain untapped within a policy of engagement for development of the Caribbean.

It was in the mid- to late 1970s that I first heard the Hon. P. J. Patterson (then Foreign Minister of Jamaica) articulate the phrase, “Jamaica is a country without borders.” He was addressing a Jamaican Diaspora group in Washington DC and he was emphasizing that wherever Jamaicans lived and worked Jamaica’s interests would be protected. He was also making the point that Jamaicans in the diaspora had an important role to play in Jamaica’s development no matter where they lived and worked at any given time.

Also in the 1970s, Jamaica was battered in the U.S. media (print and electronic), and the U.S. government (USG) – Executive and Congress – was decidedly very antagonistic towards the Michael Manley-led Jamaican government. Jamaican political opposition led by then Leader of Opposition Edward Seaga took advantage of this extremely strained bilateral relationship between the two countries to generate an extraordinary amount of support from the USG, conservative politicians and groups, as well as the U.S. press.  Supporters of Seaga in U.S. conservative circles, aided and abetted by Seaga, openly disseminated falsehoods about the Manley government.

I recall a syndicated radio program commentary of then former governor Ronald Reagan in which he made the very implausible claim that there were 10,000 Cuban troops in Jamaica.  Anyone living in Jamaica during the 1970s, or anyone taking the time to know the truth, would have known this to be a blatant lie.

Members of the Jamaican Diaspora, Jamaicans who participated actively in, and led Jamaican and Caribbean social, educational and cultural organizations across America were aghast at these negative perceptions of their homeland, and believed strongly that interference from Washington and others should not go unchallenged.  They fully supported the right of the Jamaican people and the democratically elected government to chart their own course without being directed from Washington.  Interference from Washington in Jamaica’s domestic affairs was anathema to Jamaica’s independence and the nascent democratic process in Jamaica.  They were proud Jamaican patriots first.

In 1977, then Jamaican Ambassador in Washington DC, the late Alfred Rattray, reacting to Washington’s antagonism, and determined to counteract the falsehoods and the wrongfully held perceptions about Jamaica, invited the leaders of some 28 Jamaican organizations (included Jamaican-led Caribbean-American organizations)  to meet in Washington to discuss support for Jamaica.  This meeting attended by 76 delegates (patriotic Jamaicans) which took place July 9-10, 1977 in Washington DC, the American capital, was the first major attempt by any Jamaican or Caribbean government to organize the diaspora to support their homeland on a broad scale.  I served as Rapporteur of that first conference and out of those deliberations the National Association of Jamaican and Supportive Organizations (NAJASO) was formed.  The Hon. P.J. Patterson, as Jamaica’s Foreign Minister at the time, fully supported this initiative. 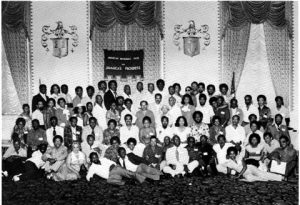 Delegates (Jamaican Patriots) at the 1977 Conference

NAJASO members played an instrumental role in the 1970s disseminating accurate information about Jamaica across the United States to counter the negative press about Jamaica and the Jamaican people.  Jamaican and Caribbean organizations (members of NAJASO) staged events in their cities and invited the late Ambassador Rattray to speak at these events and to do media (radio, television, and newspaper) interviews.  I can speak authoritatively on this subject because, as Political Officer in the Washington Embassy, I accompanied Ambassador Rattray on many of these trips.  His views were highly respected and fairly reported in local media in cities he visited.

Countering the negative media blitz was important in saving the remnants of the threatened tourism industry and the ravaged Jamaican economy of the 1970s.  Members of NAJASO met with their Congressional representatives in their home constituencies and on Capitol Hill to change perceptions.  Many of these Diaspora leaders exercised political and economic influences in their respective communities and cities. They too were effective in combating negative perceptions.

The current Jamaican government led by Prime Minister Andrew Holness has stated that it is in the process of developing a Jamaican Diaspora Policy and a framework for engagement.  Foreign Minister Sen. Kamina Johnson-Smith has suggested that the policy is in the final stage of development and should be known publicly very soon.  I am not aware of the terms of the policy; neither am I aware of any meaningful consultation by the Jamaican Government, if any, with Jamaican Diaspora leaders or groups in developing this new policy.

I am also cognizant of the recommendation of the Michael Lee-Chin led Economic Growth Council (EGC) for engaging with the Jamaican Diaspora. I must admit, also, that I am not aware of any EGC consultation, or plan for consultation with the Jamaican diaspora on modalities or mechanism for engagement.  The EGC quite rightly identified the Diaspora as representing a “very powerful reservoir of capital, relationships, skills and expertise that remains largely untapped.”  There is nothing new here.  The EGC also noted that there are successful models employed by a number of countries that perhaps could be retrofitted for the Jamaican experience. I believe the summary of recommendations of the ECG suggesting a newly defined mechanism for engaging the Jamaican Diaspora is a good start.  Members of the Jamaican Diaspora, as well as the diasporas of other Caribbean countries, will be watching very closely how this new approach is developed and executed.

NAJASO will celebrate its 40th Anniversary at a conference to be held in Jamaica in 2017.  NAJASO, for the many years of its existence, through its members and collectively, has made, and continues to make significant contributions in support of the education and health sectors of Jamaica, and has made significant contributions to the social upliftment of the Jamaican people.  While it was not the intention for NAJASO to be a mechanism for diaspora engagement on the scale now being contemplated, it’s a good time to reflect on where we are coming from and where we hope to go; where we must go as a nation together – Jamaicans at home and in the diaspora.

Ambassador Curtis A. Ward, B.A., J.D., LL.M., is an attorney and international consultant, and Adjunct Professor in the Homeland Security Graduate Program at the University of the District of Columbia. As former Ambassador of Jamaica to the United Nations he served two years on the U.N. Security Council. He was Expert Adviser to the UN Counter-Terrorism Committee for three years.