(21 December 2017) — The recent decision by President Donald Trump to move the U.S. embassy from Tel Aviv to Jerusalem and recognizing Jerusalem as the capital of Israel was in complete defiance of United Nations resolutions and international norms.  Trump’s decision was in contravention of UN resolutions which have stood for decades. The Palestinians and countries around the world  who support a two-state solution to the Israeli-Palestinian issue denounced Trump’s decision. Condemnation was almost universal, and most governments are now of the view that the U.S. has forfeited any semblance of neutrality thus removing itself from any major future role in brokering a Middle East peace.

Following U.S. ambassador to the UN Nikki Haley’s statement on possible repercussions on countries not standing with the U.S., and President Trump’s subsequent warning of cutting assistance to such countries, it was anybody’s guess which countries would be willing to defy Trump and stand on principle and in defense of international law when they voted in the UN General Assembly (UNGA). I had a keen interest on where the countries of the Caribbean, in particular CARICOM member states, were on the issue of Israeli-Palestinian two-state solution. For me it was a test of whether Caribbean governments would allow themselves to be bullied by Washington, or whether they would defend international law, as they normally would.

The first test of Trump’s new Israeli policy (no longer a Middle East policy) occurred in the UN Security Council where a draft resolution stressed that the status of Jerusalem “is a final status issue to be resolved by negotiations in line with relevant United Nations resolutions” and expressed “its deep regret at recent decisions concerning the status of Jerusalem.” The draft resolution affirmed “that any decisions and actions which purport to have altered the character, status, or demographic composition of the Holy City of Jerusalem have no legal effect, are null and void and must be rescinded in compliance with relevant resolutions of the Security Council….”

The draft resolution which was a direct rebuke of Trump’s decision was vetoed by the United States in a vote of 14 to 1. The U.S. was abandoned by its usual allies in the Security Council – the United Kingdom and France – both countries voting in favor of the draft resolution. Failure of the Security Council to act triggered a demand for an emergency meeting of the UN General Assembly to respond to Trump’s announcement.

In their explanation of votes in the UN Security Council, both the U.K. and France were very explicit on the effect of Trump’s decision on Jerusalem. UK’s Representative, Matthew John Rycroft, told the Security Council that the status of Jerusalem should be resolved through negotiations between the Israelis and the Palestinians and confirmed that the city should be the capital of both Israel and Palestine. Not only was the UK in disagreement with Trump’s decision, but the UK representative stressed that the decision had no legal effect. France’s Representative, François Delattre, noted that the draft resolution confirmed international consensus on Jerusalem which was accepted international law, and absent a peace agreement between Israel and Palestine, France did not recognize any sovereignty over Jerusalem. He noted that all decisions aimed at altering Jerusalem’s status were “null and void.” He noted further that 14 members of the Security Council had voted to confirm the validity of international law.

It should be noted that establishment of diplomatic missions in Jerusalem would be in direct violation of Security Council resolution 478 (1980). 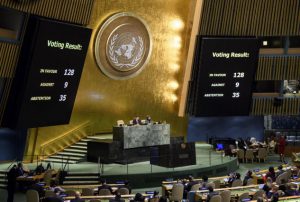 The second test for the United States came with the vote in the UNGA on a resolution mirroring the provisions of the vetoed Security Council draft resolution. The UNGA (December 21, 2017) by a vote of 128 to 9, with 35 abstentions, overwhelmingly rejected Trump’s decision and upheld the principles of international law. Most US allies, including the UK, France, Germany, and most other Western European states voted in favor of the UNGA resolution while others abstained. Some Caribbean countries in defiance of Trump’s threat to cut U.S. assistance voted for the resolution. Others either abstained or stayed away, thus raising questions about their positions on the principles of international law established through prior UN resolutions, and their positions on the rights of the Palestinian people.

The CARICOM member states which defied Trump in the UNGA and voted for the resolution were Barbados, Belize, Dominica, Grenada, Guyana, St. Vincent & the Grenadines, and Suriname.  Those which decided to sit on the fence by abstaining were Antigua & Barbuda, The Bahamas, Haiti, Jamaica, and Trinidad and Tobago. Those which decided not to show up for the vote were Saint Kitts & Nevis, and St. Lucia.

The people of the Caribbean are entitled to explanation of the votes of their governments on this most important issue.  This was a test of the political will of CARICOM member states, of whether they are prepared to stand on the principle that the Palestinian people should have the right to their own state in a two-state solution. Also, this vote in the UNGA was in defense of international law which the countries of the Caribbean region often invoke for their protection and survival. Those countries absent from the UNGA have even more to explain – without drawing any conclusion, whether it was a display of cowardice or circumstances beyond their control. Most importantly, is whether the countries which abstained, or stayed away, are fearful of repercussions from Washington? Are they subject to future blackmail?

Recent actions by some Caribbean countries have raised questions on whether expediency has overtaken principle in international relations. The people of the Caribbean, of each country in the region, need to know what their governments stood for.  There are many issues in the hemisphere and globally on which CARIOM states could be counted on the past to stand on principle.  In the UN and other international fora Caribbean governments boldly defended the oppressed and marginalized; those who couldn’t defend themselves. On these issues, Caribbean governments were now silent, or, noticeably, their positions are trending in unusual directions.