The publication, Mamo! The Life & Times of Dame Mary Eugenia Charles, is authored by Dominican-American attorney Gabriel J. Christian, one of the founders of Pont Casse Press, and who is proving to be a prolific writer and publisher of important works on the Caribbean. 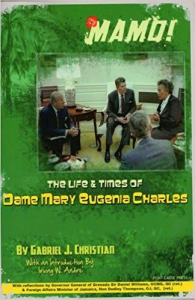 The e-book version of this publication will be available on Amazon, Google books, and 15 other e-book devices within the next few weeks and downloadable on desktops, laptops, Kindle, and smart phones.  Interested readers may get a head-start on the publication – available now at: 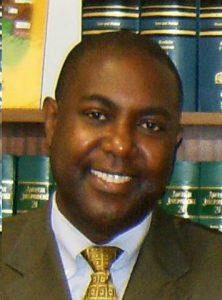 ho stood alongside US President Ronald Reagan in support of the Grenada invasion of October 1983. Her defeat of the 1981 attempted coup by local disaffected soldiers gained her respect at home and abroad.

In the early parts of the biography the reader is provided with amazing historical recall of what it was to live in Dominica in the early part of the 20th Century. Also inspiring and visionary are the efforts of striving Dominican middle class families for which education, thrift, industry and enterprise were everything as they worked tirelessly to escape the residue of slavery.

In this publication we are exposed to Dame Eugenia Charles’ own tough mother, Josephine, who ran a grocery store and bakery, and her father the enterprising and visionary John Baptiste “JB” Charles. Mr. Charles, a tough-talking banker, corresponded with the founder of Tuskegee University, the famous African-American educator Booker T. Washington and his ally Dr. George Washington Carver.  Mr. Charles sent both his sons Rennie and Lawrence to Tuskegee University (then Tuskegee Institute) in the early 20th century. It is recalled that JB Charles sought help from Tuskegee’s famous agriculture scientist, Dr. Carver, to improve agriculture on Dominica and insisted that his sons mail their textbooks to him at the end of each semester so he could also benefit from their studies.  Ms. Charles’ older sister Jane defied her father’s wishes to become a scientist and became a nun. She died at a convent outside London in the 1930s.

Dame Eugenia Charles adopted the stoicism of her father who was an early Pan Africanist and legislator who promoted self-government and the Federation of the British West Indian colonies. Gabriel Christian’s “Mamo!” is a riveting biography of the “Iron Lady of the Caribbean” which allows us insight into someone who credibly met the challenges common to developing countries and left office with her integrity intact.  At a time of great challenges in governance in the public interest, where the current Dominican government faces increased calls for transparency and accountability in its handling of passport sales and diplomatic appointments, this insight into the life of a former island leader is worthy of consideration.

An interview with Gabriel Christian by Carib Nation Television on Mamo! May be viewed at the following site: https://www.youtube.com/watch?v=P1VVoag3oUo. The rare C-Span footage of Prime Minister Eugenia Charles and US President Ronald Reagan at the White House on October 25, 1983, on the morning of the Grenada Invasion which took place after the massacre of Grenada’s Prime Minister Maurice Bishop, members of his cabinet, and supporters can be seen at this site: https://www.c-span.org/video/?101120-1/reagan-news-conference-grenada-invasion

On June 3, 2017 at the New York Public Library on 42nd Street, the New York City Council Caribbean American Heritage Month celebration will honor authors Irving W. Andre and Gabriel J. Christian, Esq., both natives of Dominica, and founders of Pont Casse Press on June 1, 1992, for their contributions to the publishing of Dominican/Caribbean history and literature on a wide range of subjects. The event will be hosted by New York City Council member Andy King of the Bronx District. Dominicans and other Caribbean residents of the New York City area are invited to attend. (To RSVP: (917) 713-0386.)