(08 May 2019) –– With key provisions critical to the Iran Nuclear Deal (the Joint Comprehensive Plan of Action – JCPOA) now under threat following Iran’s response to increased U.S. sanctions and other pressures imposed by the Trump Administration on the Iranian government and entities, the U.S. and Iran edged closer to military confrontation. With the recent decision by President Trump to deploy a carrier strike force to the Persian Gulf, thus threatening Iran with military action, tensions in the region are escalating. Iran’s regional enemies – Israel and Saudi Arabia – are now poised for what could be a conflict of great proportions throughout the region.

The military deployment follows a long series of sanctions measures imposed on Iran by the Trump Administration. On April 8, 2019, the U.S. State Department announced the intent to designate the Iran Revolutionary Guard Corps, including the Qods Force (IRGC) as a foreign terrorist organization (FTO).  FTO designation of the IRGC marked the first time the U.S. Government has designated a foreign government entity as a terrorist organization. This most recent action piled on to vastly increased sanctions measures on the Iranian government and Iranian companies, in particular related to Iranian energy and financial sectors, and now deployment of U.S. military power in the Persian Gulf pushed Iran President Hassan Rouhani’s government to a tipping point.

The situation between the U.S. and Iran deteriorated rapidly with the announcement on May 5, 2019, that the Trump Administration was sending a carrier strike force to the Persian Gulf. In making the announcement, National Security Adviser John Bolton warned the Iranian Government that any attack by Iran on any U.S. interests or allies in the region would “be met with unrelenting force.”

The Trump Administration has been gradually increasing sanctions and  imposing restrictions on Iran that has significantly impacted Iran’s oil exports. The effects on the Iran economy have been quite severe. Thus, a response by the Iran Government of some significance to the JCPOA was not unexpected.  Rouhani, while not entirely abandoning the JCPOA, has announced Iran’s intention to resume uranium enrichment, a key component of a nuclear weapons program. 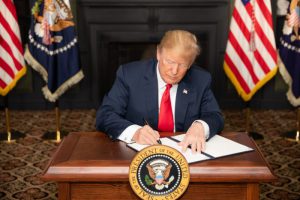 In keeping with his National Security Presidential Memorandum-11 of May 8, 2018, President Trump signed an Executive Order (EO) on August 6, 2018 re-imposing nuclear-related sanctions against Iran declaring that the U.S. was fully committed to enforcing its sanctions.  The U.S. president said the U.S. would work closely with all countries doing business with Iran to ensure complete compliance. All U.S. sanctions waived by President Barack Obama’s Administration pursuant to the JCPOA were reinstated as of November 2018, and numerous rounds of additional sanctions by the Trump Administration have been added. Between the announcement of U.S. withdrawal from the JCPOA on May 8, 2018 and signing of the EO on August 6, 2018, the Trump Administration had sanctioned 38 Iran-related targets in six separate actions.

Although the U.S. intelligence community confirmed that Iran was in full compliance with the provisions of the JCPOA, President Trump said on August 6, 2018 that “Iran threatens the United States and our allies, undermines the international financial system, and supports terrorism and militant proxies around the world.” According to President Trump, by exiting the JCPOA, “the United States is able to protect its national security by applying maximum economic pressure on the Iranian regime.” The relationship between the United States and Iran has been on a downward slope since and the two countries have been on a collision course. In the meantime, Iran has stuck to the provisions of the JCPOA. Change is now imminent.

With the addition of the military deployment and the devastating impact of the sanctions on the Iranian economy it was inevitable that Iran would respond. In making the announcement of its intent to resume uranium enrichment, Iran attempts to straddle the line between complete collapse of the Iran Nuclear Deal and remaining in some form of agreement with the other parties to the JCPOA – U.K., France, Germany, the European Union, China, and Russia. Iran’s announcement called on the European parties to the JCPOA to find ways within 60 days to continue trading with Iran or President Rouhani would resume uranium enrichment. Both Russia and China are blaming the United States for Iran’s decision.

In my article “Isolating Trump on Iran Nuclear Deal” published in The Ward Post on May 7, 2018, I noted that the Trump Administration would not be supported by the other parties to the JCPOA. As anticipated, the European countries, in response to Trump’s abrogation of the JCPOA, devised ways to allow continuing trade with Iran despite the pressures of U.S. sanctions and possible implications for European individuals and entities. The new developments will test their resolve to defy the Trump Administration. I cannot think of a scenario in which European countries will not re-impose sanctions on Iran if President Rouhani follows through with his threat to resume uranium enrichment. It will not be possible for European countries to ignore any action by Iran that could be construed as resumption of Iran’s nuclear weapons program. The stakes are much higher now than a year ago.

With attention switching between the Trump Administration’s actions against Iran, Venezuela, North Korea, and Cuba, the international community is kept speculating on what to expect next from the United States. There is one thing for certain the world is a far less safe place today than it was on the last day of President Obama’s Administration. Global instability now characterizes the Trump Administration.