Successfully hosting this program was made possible under the distinguished leadership and direction of Larry Sindass, Founder and Executive Producer of CaribNation TV.

Those interviewed had some very important perspectives to share. During the course of CaribNation’s coverage, I had the privilege of interviewing the President  of the Jamaica Athletic Administrative Association, Dr. Warren Blake; Jamaica’s National Track & Field Coach and Head Coach of G.C. Foster College, Maurice Wilson; current athletes, Jamaica’s sprint queen Shelley-Ann Fraser-Pryce, O.D., who shared her future plans, and Jamaican sprinters Schillonie Calvert, and Dexter Carter, O.D.; as well as the famous former world record long jumper, American Robert ‘Bob’ Beamon (he broke the long jump world record at the Mexico Olympics in 1968). Mr. Beamon surprised us with the Jamaicans he named who inspired his career. He also shared his perceptions on the impact of the current crop of Jamaican athletes.

It was a special privilege to interview the President and Founder of Team Jamaica Bickle, Irwine Clare, Snr., O.D., and to visit the TBJ village and see firsthand the services being provided under his leadership, and the unselfish dedication of his many volunteers. It was also a privilege to interview TBJ principal sponsor of 25 years, Vincent HoSang, founder and chairman of Caribbean Food Delights. 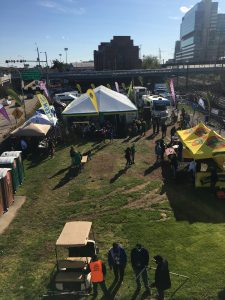 The value of TBJ’s support of the athletes were repeated over and over by Jamaican track and field administrators, coaches, and athletes, who all expressed deep appreciation for the support they have received from TBJ. For the athletes, the support has been from their first participation at the Penn Relays as high school athletes, through college, and even now on Jamaica’s senior team. The administrators and coaches told us how TBJ’s support made it possible for some teams to attend and participate in the Penn Relays, without which they would not have had that opportunity. 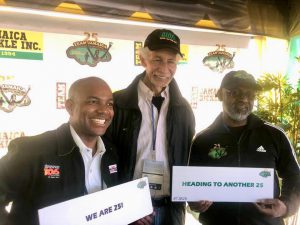 To the annual delight of the tens of thousands of Jamaicans in the diaspora, many of Jamaica’s top athletes have graced the Franklin Field track of the Penn Relays. Inspired by the large overwhlmingly Jamaican crowd support, which for many in the diaspora is also the only opportunity to see their Jamaica track and field heroes and heroines in live action, the athletes have shattered many Penn Relays records.

This is a television program you will want to watch and share. Please follow the link below and watch Penn Relays Celebrating 125 years of Penn Relays:  https://www.youtube.com/watch?v=NZ6o3zRchPA