Caribbean Policy in the Trump Era: Forum on Strategic Engagement 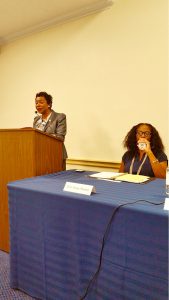 (13 June 2017) — Congresswoman Yvette Clarke (D-NY), Chair of the Caribbean Caucus in the U.S. House of Representatives, on June 8, 2017, convened an open discussion on “U.S.–Caribbean relations in the era of President Donald Trump’s Administration.” Congresswoman Maxine Walters (D-CA) was co-convener of the discussions, which were also set in the context of The United States–Caribbean Strategic Engagement Act of 2016 (H.R. 4939), signed into law on December 2016, by President Barack Obama. The venue at the Rayburn House Office Building on Capitol Hill provided for a large turnout of Congressional staffers, a few members of the Caribbean diplomatic corps, and members of the Caribbean community.

In her opening remarks, Congresswoman Clarke noted that the Caribbean was at a crossroads facing challenging issues, including from energy to the environment, and correspondent banking relationships, as well as continued recovery from the 2010 earthquake in Haiti. She referred to the opportunity provided by H.R. 4939 to work with colleagues in the U.S. State Department “to engage with Caribbean nations with the dignity and respect befitting our friends and neighbors.” Congresswoman Clarke also placed these discussions in the context of Caribbean-American Heritage Month and the contributions to the U.S. by people of Caribbean heritage. 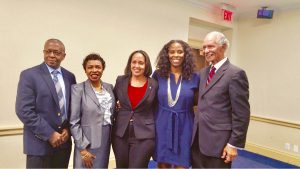 Congresswoman Stacey Plaskett  (USVI), co-chair and moderator of the discussions,  in her opening remarks noted the complexity and multi-dimensional nature of U.S.–Caribbean relations.  She characterized the Trump administration’s policies as suffering from three weaknesses, including the lack of a holistic approach, and inconsistency in application to the countries of the Caribbean.  Rep. Plaskett also expressed what she characterized as a feeling among Caribbean leaders that security issues dominate U.S. policy and not enough attention given to economic issues. She noted that “economic development of the Caribbean is inextricably linked to other important issues – democracy, governance, transnational crime….” 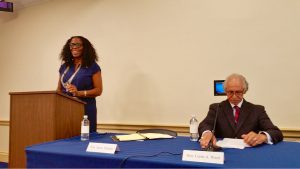 Rep. Plaskett called for a more nuanced approach in consideration of these challenges.

I along with two other panelists, Sally Yearwood (Exec Dir of Caribbean-Central American Action) and Oscar Spencer (Vice Pres of Institute for Caribbean Studies), were asked to provide our perspectives on the many issues in U.S.-Caribbean relations and engagement.

I was asked to share my perspectives on Caribbean security integration; the threat of transnational crimes to the region; threat of U.S. budget cuts on Caribbean security capacity-building including the possible effects of budget cuts on capacity building in the financial sector to ameliorate the conditions, and effect of de-risking by U.S. banks which threatens correspondent banking relationships with banks in the Caribbean region.

Due to limited allotted time, I could provide only a short brief on what are complex issues in U.S.–Caribbean relations.  I have done a more comprehensive analysis of these issues in a paper on Security Imperatives & Cooperative Partnerships in US–Caribbean Relations published on the Issues website of the Caribbean Research & Policy Center (www.caribbeanresearchandpolicycenter.org). The paper will also be available at: (www.curtiswardassociates.com).

In my presentation, I put in context the danger to Caribbean societies posed by transnational organized crime and the significant implications for the security of the region and for citizen safety.  In particular, I highlighted the multiple threats of increasing drug trafficking through the region, diminishing security assistance, and signs of radicalization leading to violent extremism threatening Caribbean societies.  I emphasized that these current security risks require proactive engagement to prevent them from developing into even more future dangerous risks to Caribbean security, and the importance of recognizing this reality in U.S.–Caribbean relations.  I expounded on the link between U.S. national security and Caribbean security with the caveat that this is not only my perspective but was the policy of successive U.S. administrations. 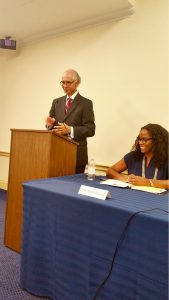 I referenced the policy framework of successive U.S. administrations, in particular the administrations of Presidents George W. Bush and Barack Obama, the Third Border Initiative (TBI) and the Caribbean Basin Security Initiative (CBSI), respectively.  I noted specifically the increased security requirements imposed on Caribbean countries in the post-9/11 era, and the lack of adequate financial and technical resources made available to Caribbean countries to realize the full potential of TBI and CBSI programs. I raised the specter of future threats from returning foreign terrorist fighters to their countries of origin, the Caribbean region, to U.S. national security; and emphasized the links between Caribbean security and U.S. national security.

I noted that successive “U.S. administrations have required Caribbean governments to increase significantly security screening in Caribbean airports and seaports to guard against terrorists using the Caribbean to gain access to the U.S. homeland; to protect civil aviation between the Caribbean and the U.S.; and to prevent smuggling of WMDs onboard ships or aircraft destined for U.S. seaports and airports.  In this post-9/11 context, the TBI vision was broadened to include enhancement of the region’s capacity for U.S.–Caribbean cooperation in dealing with potential terrorist threats.”

I stressed the importance of the terrorist threat to the U.S. Homeland and the nexus to Caribbean security as described in the January 2004 Declaration between President Bush and the Heads of Government of CARICOM states and the Dominican Republic. The TBI Declaration recognized the “interdependence and the importance of close cooperation to combat new and emerging transnational threats” to the U.S. and the Caribbean countries, and the vulnerability of Caribbean countries to these risks and threats.

I also noted that “there have been increasing concerns about radicalization and recruitment to terrorism, in particular recruitment of foreign terrorist fighters from the region joining ISIS (Da’esh or Islamic State) in Syria and Iraq.  This most serious problem will be faced by the region and the Hemisphere when these foreign terrorist fighters (FRFs) return to the Caribbean. They can be expected to pose future significant risks to their countries of origin, to the entire region, and to United States citizens (tourist and business visitors), as well as to U.S. owned assets in the Caribbean region.

I also drew attention to the proposed FY2018 budget cuts, in particular on the U.S. State Department and USAID on current security-related programs under CBSI, and on the Treasury Department’s AFL/CFT capacity-building programs.