(31 Oct. 2016) — With the January 2017 reporting date fast approaching most Caribbean countries still lack the legal and operational capacities to implement effectively the United States Foreign Account Tax Compliance Act (FATCA) provisions.  This situation exists even though Caribbean-wide compliance with adequate capacity to carry out FATCA commitments would be an indication to U.S. banks that Caribbean financial institutions are responsible partners with which to conduct business.   Compliance with FATCA requirements should help provide an impetus to U.S. financial institutions (USFIs) to reconsider their approach on the de-risking of Caribbean banks.

The consequences of de-risking resulting in denial of correspondent banking relationships and payable through accounts by U.S. banks will be devastating to the entire region.  This emerging threat should serve as a wake-up call for the region to be far more proactive in its approach to consequential bilateral and global issues.  From my perspective it seems governments of the region often articulate solutions to problems but fail to act in a timely manner.  A discerning observer is likely to conclude that words without action are meaningless.

The goal of FATCA, adopted by the U.S. Congress in 2010, is “to improve international tax compliance through mutual assistance in tax matters based on an effective infrastructure for the automatic exchange of information.” Non-compliance by any Caribbean jurisdiction creates risks for all. While bank secrecy laws, impediments to transparency and full implementation, have not been resolved to the satisfaction of the United States Government (USG), some Caribbean offshore jurisdictions appear to be moving, albeit slowly, towards compliance. FATCA is complicated in so far as laws, regulations, and operational mechanisms are concerned.  However, appropriate technology is easily accessible and technical assistance is available to Caribbean governments from bilateral partners.  Caribbean financial institutions appear to be moving much faster than some governments to meet the FATCA requirements and be ready by January 2017. 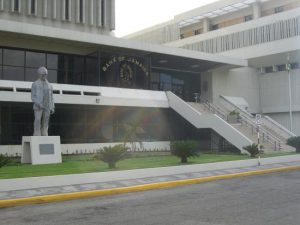 Countries around the world greeted FATCA as a burden on their financial systems.  To some, FATCA’s restrictions were overreach by the USG; others wished to protect bank secrecy laws. While the overreach argument may have some merit, protecting bank secrecy laws is anathema of standards promoted globally in efforts to counter money laundering and financing of terrorism in the post-9/11 period.

In its efforts to identify and prosecute U.S. tax evaders, the USG traditionally has entered into bilateral treaties with practically every country in the world for reciprocal exchange of financial information.  Primarily, these instruments are Tax Information Exchange Agreements (TIEAs) and Avoidance of Double Taxation Treaties (ADTTs).  FATCA, which provides penalties for non-compliance, is an effort to improve information sharing standards through automatic and “mandatory” reporting.    FATCA  also reflects USG concerns with proliferation of offshore banking facilities, including in Caribbean jurisdictions, which presumably provide havens for tax evaders.

Among the USG’s concerns is the lack of financial transparency and reporting by offshore banking jurisdictions that invariably contribute to global money laundering and underlying facilitation of international criminal networks.  In the post-9/11 period, there are concerns that money laundering and the financing of terrorism, primarily through funds derived from illicit trafficking in drugs, guns, and humans, are facilitated by bank secrecy laws which characterize offshore banking havens.  Bank secrecy laws also contribute to corruption of public officials.

FATCA raises the bar on reporting by requiring the filing of automatic reports on foreign assets held by U.S. account holders in FFIs, as well as in certain other non-financial entities.  The reporting obligation extends to U.S. taxpayers and foreign entities in which U.S. taxpayers hold a substantial ownership interest, and FFIs include banks, investment entities, brokers, and certain insurance entities.

The strength and importance of the U.S. financial system (USFS) in the global financial market place leaves very few options to jurisdictions except to comply with FATCA.  Accordingly, it was reported in US Treasury Notes that by April 2016, “112 jurisdictions (were) treated as having a FATCA agreement in effect with the United States, and nearly 200,000 financial institutions (had) registered with the IRS to comply.”  However, this is not to suggest that all Caribbean countries have entered into inter-governmental agreements (IGAs) with the USG. (For a list of the status of FATCA IGAs: https://www.treasury.gov/resource-center/tax-policy/treaties/Pages/FATCA.aspx).

In the meantime, the FATCA reporting requirements have now become the global standards for financial reporting. Any foreign government failing to enter an IGA with the USG to implement FATCA in their jurisdictions risks being denied access to the USFS and effectively being shut out of the global financial system.  FFIs not registered and in compliance with FATCA provisions will be subject to withholding on funds deposited in, or passing through U.S. banks. So far, hundreds of Caribbean FFIs have registered with the IRS.

The FATCA reporting requirements not only created higher levels of due diligence standards to know your customers (KYC) when establishing new accounts, but also created added burden on FFIs to review existing accounts (retroactively to June 30, 2014)  in order to determine the U.S. identity, if any, of depositors or beneficial ownership of such accounts.  The burden on offshore financial institutions, where bank secrecy laws often hide beneficial ownership of accounts, are even higher.

Most FFIs that are engaged in international financial transactions need access to U.S. financial institutions, including through depository accounts, correspondent banking relationships, and payable through accounts. In order to ensure unimpeded access, foreign governments are forced to enter into FATCA IGAs with the USG and FFIs to register with the IRS.  Each Government, Party to a FATCA IGA, is responsible for collecting the information from the domestic financial institutions and submitting the reportable accounts information to the USG.  Some FFIs may report directly to the IRS.

The disclosure of the Panama Papers added new pressures on Caribbean countries with “offshore banking” facilities to comply with the FATCA.  Disclosures of data linked to The Bahamas’ offshore financial sector have added to the pressure on these Caribbean countries.

In some Caribbean countries, a lack of political will coupled with technical incapacity slowed the compliance process. The USG has offered capacity building technical assistance through the U.S. Treasury Department’s Office of Technical Assistance (OTA). The central mission of the OTA is to assist countries that are committed to building strong anti-money laundering/countering the financing of terrorism (AML/CFT) oversight regimes with monitoring and enforcement capabilities.  Capacity-Building technical assistance is offered to countries to assistthem in dealing with the effects of de-risking.

According to the U.S. Treasury Department, the OTA “is initiating new projects and proactively assessing requests for assistance from countries that have expressed concerns about a decline in access to the correspondent banking relationships in their countries….”  However, the OTA only provides assistance to governments that are committed to reform their AML/CFT regimes and where the recipient government demonstrated political will.

The pace of compliance across the Caribbean could ultimately affect resolution of other pressing issues, including, as noted above, the effect on Caribbean banks of de-risking by U.S., Canadian, and European banks.