Campaign for Exoneration of Marcus Garvey in high gear

(16 February 2022) – As former Jamaican Prime Minister P.J. Patterson said, “…this global campaign is not begging for mercy or pleading for pardon as Marcus Garvey committed no crime.   Marcus Garvey was not guilty of any offence of moral turpitude.”  Hence, “The petition which we ask you to sign today for a posthumous exoneration, in contrast to a request for Presidential pardon, rests squarely on central pillars of law. Pardons are to grant immunity or to remove any disabilities, such as the right to vote, against convicted felons.   Exoneration is for the innocent ….”

The campaign to obtain a posthumous exoneration of the late Jamaica National Hero, the Hon. Marcus Mosiah Garvey, was the subject of a global forum, “The Case for Exoneration”, hosted by the University of the West Indies Vice Chancellor’s Forum in collaboration with the P.J. Patterson Centre for African Caribbean Advocacy on February 16, 2022.  This is a continuation of the global campaign to obtain 100,000 signatures on the Petition urging President Joseph Biden, Jr., to instruct the Justice Department to initiate an exoneration of Garvey in the Federal District Court of the Southern District of New York. [Editor’s Note]

Here is former Prime Minister P. J. Patterson’s presentation of a summary brief of the case for Exoneration:

By the time Marcus Mosiah Garvey migrated to the United States, the Confederacy revolt and the Civil War had ended but the stains of slavery and racism had not been erased.   Their deleterious effects in the quest for full freedom and equal rights were evident everywhere.

“For three hundred years The Negroes of America have given their life blood to make the Republic the first among the nations of the world, and all along this time there has never been even one year of justice”, Garvey wrote.

His outright condemnation of innumerable instances of racial oppression, of lynching and burning as “crimes against the laws of humanity, and a crime against the God of all mankind” was gospel to the ears of 370,000 African- Americans,  who had fought against Nazism and Fascism in Europe but returned home to face violence and racism in the riots of East St. Louis, of Chicago in 1919,  of sharecroppers in Washington D.C., of the destruction of a black flourishing Town in Rosewood was simply deplorable and untenable.

In Tulsa, Oklahoma, a prosperous black community had ben razed to the ground by a white mob.    The White incendiaries were insisting that the sons and daughters of slaves existed to provide cheap labour to pick cotton and cut cane; not to build a Black Wall Street.

These and other atrocities impelled Garvey to lift his “voice against the savagery of a people who claim to be dispensers of democracy.”

As his denunciation of these evils intensified, as he raised funds to assist the victims of racial violence, as he started to publish the weekly Negro World Newspaper and dared to launch The African-Communities’ League to be a business arm of the UNIA, The White Supremacists came to realise that his message and power of mobilisation were repugnant to their designs.   Garvey came to be known as The Black Moses.   To those in the American Establishment, he was regarded as a threat to the very foundation on which their architecture of governance and the practice of racial superiority had been built. 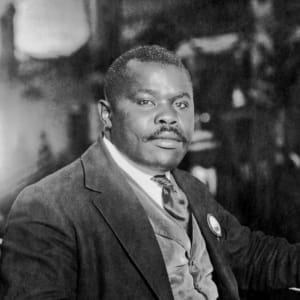 Garvey’s oratorical skills, his passion for racial justice, his entry to the field of business and recruitment of black men and women to secure good paying jobs in his Negro Factories Corporation, the enrolment of six million people worldwide as Members of The U.N.I.A. were intolerable for White Supremacists and several agencies of the Federal Government.

The moment had come to draw a line.

The Bureau of Investigation feared his power and wanted his expulsion from the U.S.A.   The powerful J. Edgar Hoover was determined to stop Garvey – by fair means or foul.   He engaged black spies to infiltrate the U.N.I.A. and indulged in extensive surveillance which was among the most aggressive in his infamous programmes against Leaders of the civil rights movement.

After many failed attempts to find criminal wrong-doing and reasons to deport Garvey as an undesirable alien, J. Edgar Hoover sought to imprison this man who had the audacity of launching The Black Star Line. He indicted Garvey and three Directors on charges of “conspiracy to use the mail in furtherance of a scheme to defraud.”

The petition which we ask you to sign today for a posthumous exoneration, in contrast to a request for Presidential pardon, rests squarely on central pillars of law.

Pardons are to grant immunity or to remove any disabilities, such as the right to vote, against convicted felons.   Exoneration is for the innocent – Those who should have been acquitted at trial because there was no wrongdoing proven.

I contend – “There was no evidence given during the trial on which a conviction could be based.”   That is also the view of learned jurists and eminent trial lawyers.

The entire trial process is replete with glaring instances of prosecutorial misconduct, including State Attorneys suborning evidence from key witnesses.   In recommending clemency, to President Calvin Coolidge, three years after Garvey’s wrongful imprisonment, Attorney General Sargent subsequently opined that “the facts as reported to the Department are severely stated and susceptible of modification and explanation.”

That was a terrible understatement.   A full professional review should have triggered repudiation of the preceding verdict of guilt.

I submit the evidence was never there and Garvey had no case to answer.

The Trial Judge should have recused himself.   His racist views were notorious, and he falsely denied being a Member of a Group known to be bitterly opposed to Garvey’s mission and the teachings of the U.N.I.A.   His frequent outbursts and biased rulings violated every tenet of judicial conduct in the jurisprudence of the common law.   He was the Persecutor in Chief and the 12 White Jurors acted in compliance with his orders to return a verdict which was an egregious miscarriage of justice.

The systemic prejudices in the prevailing justice system resulted in a trial by Garvey’s so-called peers – an all-white jury, if you please.

The principal witness was a nineteen-year-old who was coached by the prosecutors to lie and who admittedly proceeded to commit perjury in his testimony.

The travesties I have already pinpointed should be more than sufficient to persuade President Biden, in response to this global campaign, to order his Justice Department, with the appropriate engagement of the U.S. Attorney for the Southern District, to obtain the only legal remedy – exoneration – to quash the verdict of guilt and clear the blot against Garvey’s good name at long last.

Egregious though these errors in the proceedings were, there is yet one irrefutable ground why the conviction cannot stand.  Perry Mason would have called it – “The Case of the Empty Envelope.”

The offence was mail fraud.   To succeed, The State had to establish inter alia, that mail was sent through the postal service from a post in the Southern District of New York by Marcus Garvey, or on his orders soliciting shares in a company which was defunct or bankrupt.

What was the evidence placed before the Trial Court?

No secondary evidence could be adduced or was there even a feeble attempt to do so, as to what were its contents.  So how could any Judge allow a jury to guess or speculate what its contents might have been?

the contents of the envelope and that they were inculpatory.

For these compelling reasons, this global campaign is not begging for mercy, or pleading for pardon as Marcus Garvey committed no crime.   Marcus Garvey was not guilty of any offence of moral turpitude.

The petition for Garvey’s posthumous exoneration should not be confined to persons of African ancestry.  It deserves the support of every man and woman in every continent and island who loves justice and equality under the law.

It is more than 100 years ago since this manifest act of injustice was perpetrated on Marcus Mosiah Garvey, a man whose only conviction was to Get Up, Stand Up, Stand Up for your Rights.

The P.J. Patterson Centre for Africa-Caribbean Advocacy joins with the Marcus Garvey Institute in this Global Campaign.

One God, One Aim, One Destiny.

[The Most Hon. P. J. Patterson, ON, OCC, PC, QC, Statesman-in-Residence and Director of the P.J. Patterson Centre for African Caribbean Advocacy. (https://www.cafricara.com)]