Written by Akelia A. Maitland 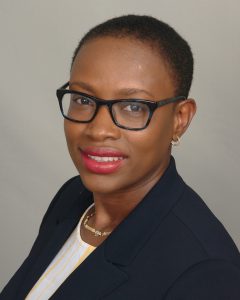 A Leadership Imperative: Preserving Our Voice

At the 8th Biennial Jamaica Diaspora Conference (June 16-20, 2019) in Kingston, the Ministry of Foreign Affairs and Foreign Trade (MFAFT) Jamaica introduced the Global Jamaica Diaspora Council (GJDC) as the successor body to the Jamaica Diaspora Advisory Board (JDAB). Thus far, throughout consultations, members of the Northeast USA community leadership have expressed either strong feelings against the Council or remain ambivalent to the true purpose of the Council. Given the level of change being promoted in the institutional structure of the collective Jamaican Diaspora, championship and not ambivalence is needed.

Broad-based community support is lacking due to a feeling of being dismissed and disregarded as the process to design the Council did not allow for a high level of Diaspora collaboration and engagement, particularly, across all regions. This is especially troubling given that the proposed GJDC designed by MFAFT has a specific mandate to engage all of the Diaspora, their main stakeholders.  This position ultimately reinforces the notion that the GJDC ultimately benefits MFAFT’s interests and not the Diaspora’s interests. As designed, it is interpreted that the current Terms of Reference (TOR) regarding the new institutional structure of the GJDC shared with the community via MFAFT restricts elected representatives to being advisors to MFAFT only. 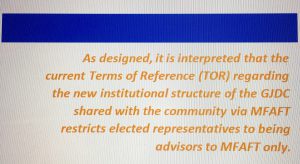 It is our view from consultations in the Northeast USA that what is needed is a mechanism that mobilizes the Diaspora through elected representatives. Why conduct an election solely to put members of our community on a Board that serves MFAFT only? Consequently, to respond to our community leaders’ concerns, at this time the Northeast USA Diaspora region is not prepared to conduct an election.

The Advisory Board structure, and subsequently the GJDC, is the closest we in the Diaspora come to representation before the Government of Jamaica. After all, as overseas nationals the barrier to vote in Jamaica bears a cost and is primarily inaccessible. This single formal institution activates our participation in nation building at a high level. It is imperative that we create the space and allow time to hear what our community has to say. For these reasons, it is important to state that when the GJDC was presented — only two to three days before the 8th Biennial Jamaica Diaspora Conference — it opened the door for a system closer to what we assessed was needed. This being clear terms of engagement that explicitly indicated unfettered representation of the voice of the Diaspora. 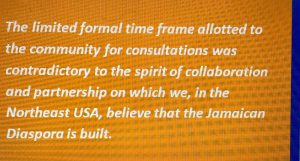 The GJDC is a new body which requires highly substantial Diaspora ventilation, consultation and participation, in the least, by our wider community leadership. These concerns are raised because two weeks were allotted as a formal time-frame provided by MFAFT for consultations.  This permitted limited flexibility to extend and facilitate true consultations within the community despite a formal request to do so through to September/October 2019. The limited formal time frame allotted to the community for consultations was contradictory to the spirit of collaboration and partnership on which we, in the Northeast USA, believe that the Jamaican Diaspora is built.

These concerns are also particularly relevant as critical elements in the Government’s proposed efforts towards sustainable development, whereby the positions taken seemingly contradict the Government’s interests in being true Diaspora partners. Process matters. As a collective, we have readily implemented many initiatives that failed due to a lack of partnership and attention to process and inclusivity. 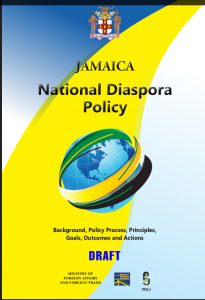 participation in issues like the Cockpit Country mining is a glaring example of the need for explicit representation of community. How many have seen the elected Board members at the forefront of these issues, whether or not we agree, and acknowledging that we will use our elected imperative to bring the community’s concern before government? If the proposed structure of the GJDC limits the role of an elected member, we still have an imperative to ensure that the newly developed Council reflects unfettered representation. At present, there is no confidence that the GJDC will fulfill this, given that the indicated role in the TOR of the GJDC has not changed from the current structure, but rather has indicated the expansion of Government’s role in the Diaspora structure.

Early September, in a letter in response to a request for additional time for consultation, MFAFT indicated a willingness to meet with community leaders to respond to their concerns. They also communicated that support of the GJDC is unanimous. We await the scheduling of such a meeting. The US Northeast region formally responded with concerns to the GJDC. Support of the GJDC within the Northeast USA is therefore not unanimous. As a result, until such time, the GJDC should not be advanced until there is a sense of mutuality. The GJDC represents an opportunity for greater collaborative partnership between Jamaica and its Diaspora. Let’s ensure it does so by bolstering the elements that represent the collective Jamaican Diaspora voice.

Akelia A. Maitland is Northeast Representative for Jamaica Diaspora Advisory Board

Akelia A. Maitland is Northeast Representative for Jamaica Diaspora Board